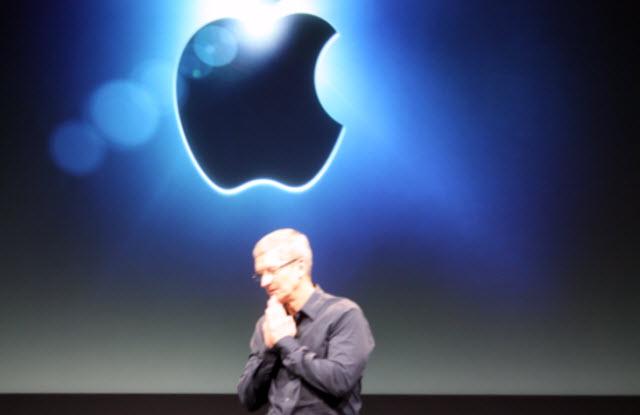 No one expected Tim Cook, chief executive of Apple, to walk on water and make us all forget about his predecessor Steve Jobs during Apple’s first major press event since the change in command this summer. Cook is now the head of what has become a kind of religious cult in technology — one with an increasingly large and mainstream following. The question is whether he has really stepped up as the new pope. The answer: it isn’t clear. This event was missing some of the Steve Jobs sizzle, for sure.

Cook was under a harsh spotlight, with five satellite trucks outside of Apple’s headquarters today and an army of reporters and photographers recording his every word. In a room where Steve Jobs introduced the iPod a decade ago, Cook competently, deliberately, carefully, and humbly communicated what needed to be said.

“This is my first product launch since being named CEO,” Cook said as he came out on stage. “I’m sure you didn’t know that. I love Apple. I consider it a privilege of a lifetime to be here.”

It was nice to hear a little joke, since that was what Jobs often used to loosen the tension in a room. Cook rattled off the stats about Apple’s momentum, just as Jobs always did to heighten the tension. He didn’t mention Jobs at all. He took a light jab at the competition by saying that competitors have been trying to copy the MacBook Air, unsuccessfully.

In one respect, Cook gets a big plus. For most of the event, perhaps a little too much of it, he wasn’t on stage. He let his lieutenants take the spotlight instead. Executives Scott Forstall, Phil Schiller, and Eddy Cue all got plenty of time to talk about their different areas. Jobs had the presence to outshine everyone, and so it made sense for him to command the stage much of the time. But Cook’s lack of stage time communicated a message. It meant that Apple was no longer a one-man show.

Those executives announced a steady stream of innovations: a better camera, the iCloud, iTunes Match, and even new faces on an iPod Nano to make it look like a wrist watch. Cook let Phil Schiller introduce the big product of the day, the iPhone 4S. That made everyone think that Cook would come back on stage later and introduce the iPhone 5 himself. But that was not to be. Apple wowed the crowd with the introduction of Siri, the talking personal assistant.

But the crowd had been conditioned to expect an iPhone 5, and Cook said nothing to manage those expectations. Jobs used to always save his thunder for last, saying, “One more thing.” But Cook walked off stage without any coda. He said he was proud of the company and its employees. He did a reasonably good job at that and he showed off his ability to speak in a high-pressure environment without blowing it.

But I wondered where was the Apple magic.We’re getting used to seeing miracles in technology, business performance, and creativity from Apple. That’s why we could believe all of the crazy rumors circulating about what the company would announce. A lot of this has to do with managing expectations. Would it have killed Apple to issue a one-sentence press release early on that said, “We will not be launching an iPhone 5 at this time”? If I knew an iPhone 5 was not coming, I would have been much happier with Cook and company about innovations like Siri.

Apple has some very fierce competition now. Android phones are being activated at a very big pace. It was good that Apple got Sprint as a carrier, so it can stave off market share losses. But Apple has to keep running faster and move ahead with a multitasking strategy if it hopes to avoid the fate of the last war, when the Wintel PC walked off with most of the market share and left Apple in a corner.

But Apple has all of the advantages now. It has the second-largest market value on the stock market, at $345 billion. It has sold 250 million iOS devices and 300 million iPods. This company should be able to do many things at once. It can multitask, launching one thing after another. Wouldn’t it have been great if Facebook had announced its mobile project at the Apple event? Or if there was an iPhone 5? Or if Sprint had negotiated an outrageous exclusive? Apple has the capacity to do all of these things and continuously stay ahead of the competition. Apple could have moved on to the iPhone 5 even as the competition was learning how to copy the iPhone 4. Instead, Apple has taken a middling step forward.

Maybe that’s why Cook isn’t Steve Jobs. If Cook wants to match some of the Jobs magic, he has to step up the miracles. Whatever it took to get to the “One more thing,” it seemed that Jobs was able to pull them off, bringing hard negotiations to a termination just in time so that Apple could show off on stage. I could understand why the stock price fell slightly after the iPhone 4S launch. We just expected more.

I’m willing to give Cook a pass for his first time. Maybe he will deliver an iPhone 5, after all. But next time, Cook had better shake up the whole world.