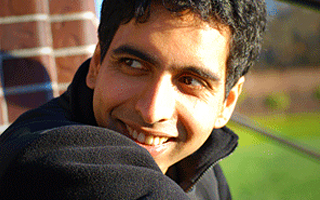 Sal Khan, a YouTube phenomenon, is on a stage talking to higher education professionals about how he’s disrupting their business. How he got here is an interesting story that has everything to do with money.

“I can’t claim to be a Mother Teresa, but the fact that helping people is more important than making money is just reality,” he told us.

In 2006, Khan was working in the world of hedge funds. To help his young cousins who were struggling with science and math concepts in grade school, he started tutoring them remotely via a series of YouTube videos.

This work, which became known as the Khan Academy and has turned into his full-time job, was less about financial profit and more about helping people who desperately needed a higher quality education.

Today, five years later, Khan has made more than 2,600 micro-lessons and posted them on YouTube. They’re all free for anyone to watch; yet somehow, without revenue, Khan feels he is more successful than he was in the world of finance.

Now, Khan is addressing a room of industry professionals at the Future of State Universities Conference in Dallas, talking about how technology can be used to give everyone a better education. The conference brought together education influencers from around the world, including university heads, state governors and policy makers. Moments before he spoke to them, Khan took a moment to talk with VentureBeat, and he gave us some amazing insights about work, money, happiness and the value of helping others.

When he started the Khan Academy, he said, “Helping people felt good. Not good enough to quit my job, but all of the sudden, the idea that I could reach millions on a regular basis and transform their lives, it made a lasting impact. That mental model, being able to do that rather than racking up points on a scoreboard, it’s a no-brainer.”

Back in his hedge fund days, Khan said he saw financial gain as “a way for me to prove myself, a scoring mechanism.”

These days, thanks to the guidance of mentors who had plenty of money but placed a greater emphasis on morality and family, Khan said he sees wealth in a new light.

“If you have enough money to buy a house and a couple Hondas, you have everything you need. Beyond that, you should be optimizing for your happiness.”

Currently, the Khan Academy operates on funding from donations and support from various foundations, but Khan says, “The social ROI is pretty huge… We hope that it’s sustainable so we can stay 100 percent focused on the mission.”

He also notes that the Khan Academy is becoming a powerful brand name in education. “We’re delivering value. And there are models we can leverage while still keeping our core content free.”

We asked Khan what industries other than education could stand a good shake-up from the tech industry. “I think the big one is healthcare,” said Khan. “Both education and healthcare are a huge part of our society, and both, because of structural strangeness, have been hard to change.

“But it’s obvious there’s room for change. I suspect that the best way to help this industry is to rethink it from the ground up. I’m sure people thought that was very hard to do for education, but we created a clean slate.”

Khan finished off our conversation with a comment on one of the most powerful and overarching forces in the world: Political freedom.

“I think democracy itself is undergoing a transformation,” he said. “Look at what’s going on in the Middle East. Because of cross-border communication, it’s changing what it means to be a nation.”