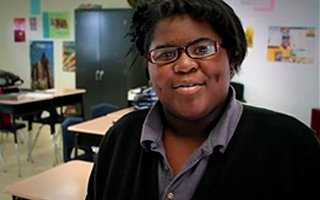 For kids from low-income backgrounds who want to level up, getting money for college is one of the most significant and most daunting challenges to try to overcome.

Takeashine is a new crowdfunding platform that aims to help deserving, underprivileged youth get the money they need to continue their education.

“Takeashine has the potential to not only directly changes the lives of students, but to change the way we approach the community’s role in the process of educational access,” founder Sarah Baird said. “I think technology’s ability to create large-scale social impact is only getting started.”

This New Orleans-based nonprofit lets students close the gap between government and school estimates of financial ability and the students’ actual ability to pay for school. Because of the way the financial aid system works, young people are often assumed to have a higher “expected family contribution,” or EFC, than the amount their family or they themselves can actually afford to pay for school.

The organization currently has five fellows in New Orleans. Beginning next year, Baird hopes branch out to three cities per year over the next three years.

Baird came up with the idea for crowdfunded college aid while she was working as press secretary for the Governor of Kentucky; this idea developed further as she joined the the Louisiana Association of Public Charter Schools as its communications director.

“When meeting with constituents out around the state, an issue faced by families time and time again — and especially those from underserved communities — was a deep and profound concern over paying for higher education,” she told VentureBeat in an interview.

“The notion of inequality around access to higher education due to financial constraints resonated with me. While there are numerous high-level organizations working to prepare low-income students academically for college, there are no organizations to help them bridge that gap financially.”

Here’s a demo video showing more about why Takeashine is important and how it works:

Baird said her strong “belief that technology is a profound vehicle” prodded her to apply the crowdfunding model — a buzzword if ever there was one — to a real-world problem and try to make a difference.

Baird told us that college micro-lending programs do exist, but none use the crowdfunding approach. “Takeashine is different because it focuses specifically on low-income, underserved student populations for whom college is especially cost prohibitive, and the money comes as a kind of investment in the student’s future instead of a loan that must be repaid,” she said.

She also said that the organization plans to scale “in a pretty rapid fashion in order to serve as many students as possible as quickly as possible.”

Baird continued, “People frequently talk about housing bubbles and tech bubbles, but what’s often ignored is the massive higher education bubble that has caused the cost of college tuition to skyrocket over the past decade. College is now placed out of reach for many families, and in particular students from low-income backgrounds.

“The most worrisome part of this is that this trend of extreme college costs doesn’t appear to have any end in sight, making this a major hurdle both currently and well into the future.”

Takeashine is part of the Social Entrepreneurs of New Orleans New Venture Accelerator. This incubator program has allowed the startup to launch its pilot class of fellows, who are raising funds through December 15, 2011.

On February 1, 2012, the Takeashine platform will open to all students in New Orleans. “The locations we plan on targeting next are primarily in various stages of post-recession recovery, such as Detroit,” said Baird. Each location would have its own program director to manage operations and help both students and donors.

Takeashine is currently in the early stages of exploring funding and partnership options with larger organizations.

“Takeashine has the potential to not only directly changes the lives of students, but to change the way we approach the community’s role in the process of educational access,” Baird concluded. “I think technology’s ability to create large-scale social impact is only getting started.”