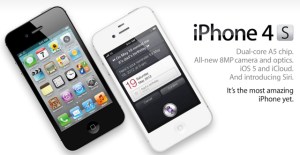 Just a day after opening up pre-orders, Apple has completely sold through its stock of new iPhone 4S devices for its Oct. 14 U.S. launch day.

Apple debuted the latest model of its iPhone, the iPhone 4S, last week to much anticipation. The new model features upgrades to the phone’s processor, camera and a new personal voice assistant called Siri.

Orders for the iPhone 4S are now listed with shipping estimates of 1-2 weeks, indicating that the time frame for getting the new phone on launch day have ended.

Apple has already experienced insane demand for the new iPhone, with U.S. wireless carrier AT&T reporting that it had already taken well over 200,000 orders just 12 hours after making the phone eligible on its website, according to Reuters. And although nothing has been officially reported, I would imagine both Verizon and Sprint have similar pre-order numbers — meaning Apple has likely pushed over half a million pre-order agreements for the iPhone 4S devices in a single day.

Some analysts expect that Apple will sell close to 27 million phones in the October-December quarter, according to the report from Reuters.