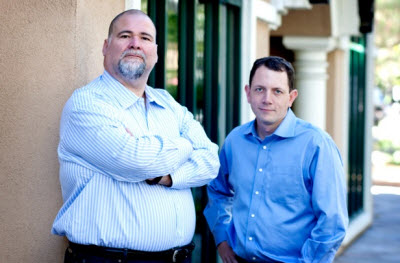 Consumers have become apathetic about retailer price protection programs. So Pricetector has created a new kind of social loyalty program that works for both consumers and retailers.

The Los Gatos, Calif.-based company has raised $2 million in seed funding for its program, which helps consumers get better deals both before and after they buy, via a mobile app. It also helps retailers target discounts to specific consumers and thereby engender more customer loyalty.

Rob Levy (pictured, on left) and Paul Patterson (pictured, right) started the company in January. Patterson, a veteran startup sales and marketing executive, was out shopping for appliances at Best Buy after buying a new house. A sales assistant told him not to worry about the price tag on some big-ticket items because there was a price-adjustment policy for 30 days after purchase. If the price of the item dropped in the next 30 days, then the store would return the difference to him. But Patterson realized there was no easy way to return to the store on a regular basis to check prices. 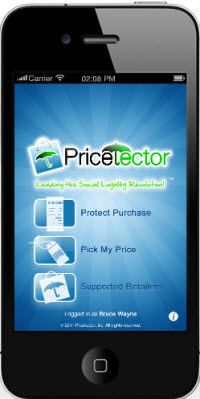 “Most consumers were skeptical of the value of the price protection policy,” Patterson said. “It was frustrating on both sides.”

The whole point of the policy was to get consumers to buy something on the spot. Over dinner, he and Levy, former chief technology officer at BEA Systems, started brainstorming how to automate the process of checking such prices. Once they figured that out, they started Pricetector.

To log the purchase, the consumer uses a smartphone to take a picture of the receipt, while the app is open. Pricetector can automatically record the information and cross-check it against the pricing information that it gets from retailers. If the price of an item drops within the time period set by the retailer’s policy, Pricetector will prompt the retailer to issue a promotional branded gift card, which drives repeat purchases, gets the consumer back into the store, and builds loyalty. At the moment, the consumer has to take the receipt to the store to get the discount.

Pricetector also offers a Pick-My-Price option where customers can use the mobile app to set the price they want to pay for a retail item. They scan the item’s bar code and set their price, and the retailer can respond by making that item available at the discounted price. Pricetector notifies the consumer if and when that happens.

The company will use the round of money to build out its team and its platform. Pricetector has been running a beta program with 30,000 consumers since early this year. It has tracked 179,893 retail items to date, with about a third of those eligible for rebates. The total cost of those items tracked is $54 million, and the potential consumer savings from the rebates on those items is $3.3 million, or 6 percent per customer.

This kind of money really adds up. The U.S. Commerce Department estimated that 2010 holiday spending was $380 billion. About 6 percent of that is $22.8 billion.

“We are looking to get consumers to recover that money,” Levy said. “Our objective is to make it as easy as possible.”

Michael Burry invested the $2 million in the company and he will become chairman of the board. Burry is founder of the Scion Capital hedge fund. He said that Pricetector stood out because it attacks a huge market inefficiency in retail. David Allen, former chief technology officer of i365, and Itamar Simonson, professor of marketing at Stanford University, will join the company’s board of advisors.

Levy said the program pays off better for retailers than “daily deal” offers such as those created by Groupon. This is because retailers can precisely target consumers based on what they want to buy.

Levy said the average American household has memberships in 14 loyalty programs, according to research by Colloquy. But only 27 percent of members have received a loyalty program or promotion that made them feel like they were a valued customer. And 85 percent said they hadn’t heard from the loyalty program since the day they enrolled, according to ACI Worldwide. Other rivals include Shopobot and Price!Pinx. But Patterson said Pricetector is unique because it has a social smartphone app.

“We feel that the market opportunity here is very large,” Levy said. “And we think that other apps can be built on top of our platform.”