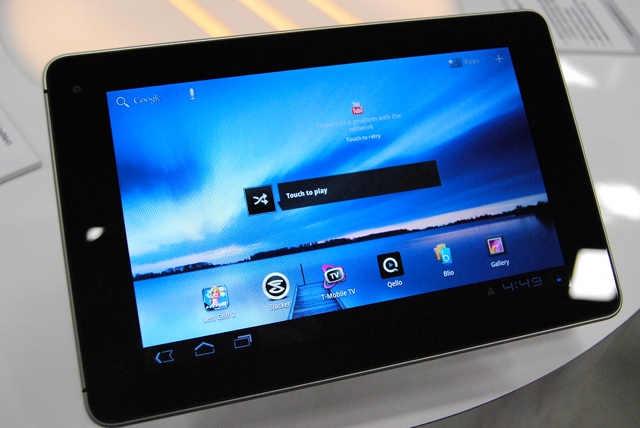 Chinese mobile manufacturer Huawei on Tuesday announced its 7-inch Springboard for T-Mobile, a new Android tablet that will compete with other 7-inch tablets such as the Samsung Galaxy Tab 7 and the red-hot Amazon Kindle Fire.

Android tablets have failed to make substantial headway against Apple’s iPad, but cheaper Android-based tablets could start to eat into the iPad’s market share since the least-expensive iPad 2 costs a hefty $499. Enter Huawei, which already offers low-priced Android phones in the U.S.

I was able to get hands on time with the new Springboard on the floor of the CTIA Enterprise 2011 show in San Diego. It’s light at 14 ounces and relatively small at 7.48-by-5.08-by-0.41 inches. It felt nice in my hands and the aluminum body felt surprisingly premium compared to Huawei’s cheap-feeling plastic phones. The tablet’s 7-inch screen has 1280-by-800 resolution and pictures and text looked good on it. There’s a 5-megapixel camera on back and a 1.3-megapixel front-facing camera for taking pictures or videochatting.

As far as performance, the device felt slightly sluggish compared to my iPad 2, but it was still fast enough to scroll through and open apps to hardly notice the sluggishness. In runs the Android 3.2 mobile operating system, which is optimized for running Honeycomb on 7-inch tablets. Inside, the machine has a 1.2-GHz dual-core processor and HSPA 14.4 data capabilities that allow for fast processing and speedy T-Mobile “4G” data.

Unfortunately, Huawei and T-Mobile have not yet announced pricing and availability for tablet. That said, Hauwei is known for value pricing, and if it wants the tablet to compete with the $199 Amazon Kindle Fire, it would be smart to keep it under $200 with a 2-year contract. A Huawei spokesperson on the CTIA show floor said it should be available “before the holidays.”