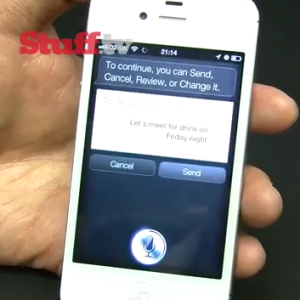 A hands-on video demonstration of the new voice assistant feature Siri on the iPhone 4S is making its way around the web.

Siri, which Apple debuted at its press event last week, is a new iOS feature that lets you ask your phone a question and get an (artificially) intelligent answer. For example, you can ask Siri to send an email to your mother and the automated voice will walk you through the entire process without making you physically pull up the email app or start typing. The feature is much like handing your phone to another person and telling them what to do with it.

While Apple did play a Siri demo clip at its press event, you couldn’t tell if the feature actually worked as intended. But after watching the hands-on video of Siri in action, I have to admit I’m impressed.

The nearly three-minute video was shot at a busy Apple Store in London by Stuff.tv. Despite a fair amount of background noise, Siri was able to determine voice commands like “What’s the weather like today?” and “What is the distance between here and the moon?”. To activate Siri, you have to physically press the button on the bottom of the touch screen, and press the button again when you finish speaking. The video featured two different voices — a woman with an American accent and a man with a British accent. Yet, I’m assuming there will be more choices.

Check out the video embedded below and let us know what you think in the comments.