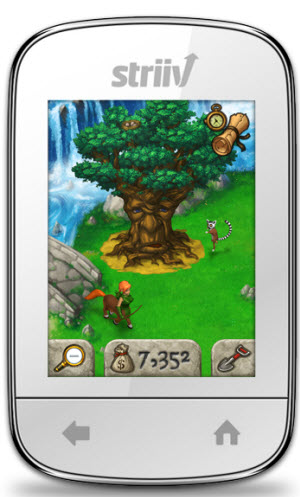 The deal is a coup for the Redwood City, Calif.-based startup. Striiv makes a gadget that hangs on your key chain and keeps track of every step you take. The more you walk or run, the more you’re rewarded with points on the device’s small display. The gadget is an example of gamification, or taking an activity that isn’t that fun — exercise — and making it more fun with game mechanics such as an encouraging reward for walking 1,000 steps.

HSN will offer Striiv to its customers as an exclusive retail bundle with unique accessories, selling for $99.95. It will be featured on HSN during several sales events that will run throughout the holiday shopping season. David Wang, chief executive of the company, said in an earlier story that Striiv lets you turn everyday activities into fitness opportunities. The gadget measures your every step, even when you’re walking up stairs, and gives you chances to hit personal goals, play games with friends, and make donations via walkathons.

Wang said that the HSN partnership will build awareness for the device during the important holiday selling season. The company seems to be betting that women in particular will find the device appealing, as they are the primary viewers of HSN. What’s more, HSN viewers are likely to be couch potatoes who need some extra motivation for exercising.

Striiv has built-in sensors, which the company calls its TruMotion technology, for detecting whether you are walking, running, or going up stairs. The Striiv device has enough battery life to last for four or five days of use. And it has a high-resolution screen powered by a dual-core ARM-based processor.

Striiv recently raised $6 million in funding to finance the launch of the new device and to further its mission of taking active gaming outside the living room.

With Striiv’s first game, which is embedded on the device, you can score points by exercising. In the game, MyLand, your enchanted island fills with more exotic wildlife and plants the more you move. It’s kind of like a fantasy version of FarmVille, with centaurs and crops. You can grow things using energy, and you can get more energy by moving around. No setup is required and the device has its own tutorial. Striiv has partnered with Global Giving to make donations toward charities during your own “walkathons.”

“Striiv is unlike anything in the marketplace today where through your own activity and movement, you can play games, track your progress, and give back to charity,” said Sandy Conrad, senior vice president of merchandising for HSN. “The device is tailor-made for the HSN customer – busy women juggling family and careers but [who] like all of us, [want] to be more active.”

Formed in 2010, Striiv’s team includes social game and tech industry veterans. Wang’s background is in location-based technology. Both Wang and design head Lexy Franklin were members of Booyah’s team that made the location-based game MyTown, which is like Monopoly in the real world. Booyah’s original app gave people rewards for all sorts of achievements, but Wang said Striiv wanted to be laser-focused on just one goal: fitness.

Rival technologies include Basis, which makes a wrist band that measures your movement, heart rate and perspiration. Striiv has more than 20 employees.