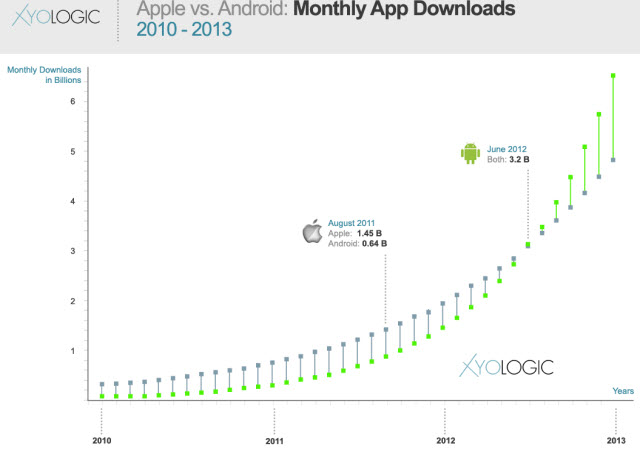 It makes sense, since Apple is just one company, whereas Google’s Android has many companies behind it. Android smartphones and tablets have also been selling very well worldwide. The number of monthly iOS app downloads is now about 1.45 billion, compared to 640 million for Android. By June 2012, both will be about 3.2 billion (see chart at top). After that, Android will leave Apple in the dust, Xyologic cofounder Matthaus Krzykowski told VentureBeat.

“Apple continues to grow at exponential rates, but Android is growing at hyper-exponential rates,” Krzykowski said. “In the coming months, we’ll see a number of countries where Android becomes No. 1.”

The chart below shows that Apple has had 18.2 billion app downloads to date, compared to 6.76 billion for Android. At that rate, Android will catch up with Apple in total downloads by mid-2013, according to Xyologic. 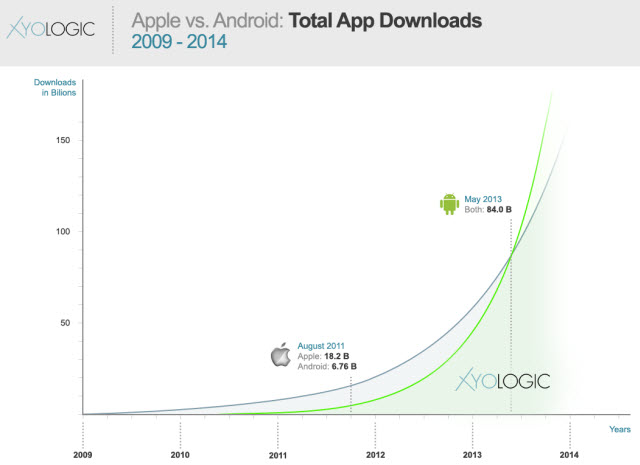 During August, Android overtook the iOS monthly app downloads for the first time in three tracked countries: Czech Republic, Poland and Portugal. One country where Apple has gained market share is South Korea, which in February accounted for 9 percent of all Android Market downloads. Now it makes up only 3.2 percent of Android downloads.

Other data shows that iPod Touch and iPhone consumers downloaded an average of 8.7 apps during August. Apple saw 1.212 billion app downloads during the month. Apple also has sold an estimated 200 million devices now (not counting iPads). Xyologic estimates that the number of iPhone and iPod Touch devices sold last year was 140 million. In the chart below, the data shows there are 465,729 Apple apps, compared to 289,305 Android apps. Android is projected to overtake Apple by August 2012, when both will have about 680,000 apps. That day of reckoning has been put off in part because Google has begun deleting inactive or low-quality apps. The deletion rate has grown from 20 percent in November 2010 to 48 percent in July. The Google team is deleting tens of thousands of apps a month. Apple deleted about 30 percent in 2011.

Berlin, Germany-based Xyologic will release 220 app download reports from across 29 countries, giving much more transparency to the who’s who of mobile apps. On a monthly basis, app makers will be able to keep score of who is doing the best in each different country. 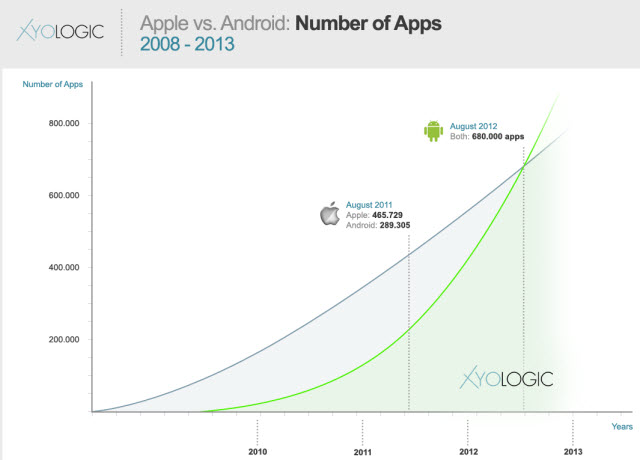