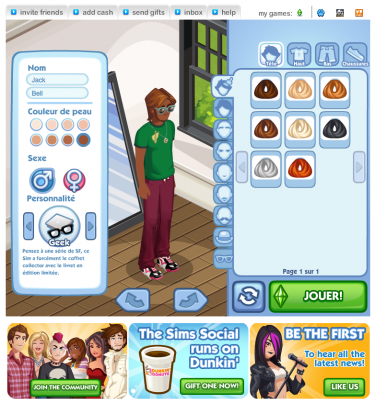 Electronic Arts came out of nowhere when it launched The Sims Social on Facebook. The social game that simulates human life took off like wildfire, surpassing FarmVille and closing in on Zynga’s most popular game, CityVille. Now Raptr, the social network for gamers, has revealed some interesting data about just who is playing The Sims Social. As suspected, many of the players came from Zynga.

The Sims Social is now the No. 2 game on Facebook with 66 million monthly active players, compared to 76 million for CityVille, according to AppData. If roughly half of those players came from Zynga, we’re talking about close to 33 million users. Of course, not every single one of the Zynga players has quit playing a Zynga game in order to play The Sims Social. But CityVille has dropped from more than 100 million players.

Worth pointing out: The Sims Social has gained quickly on CityVille, but the rate of gain has slowed down dramatically recently. The latest Appdata information in recent days shows that CityVille is holding strong now.

The first trick in EA’s playbook, according to Raptr’s analysis, was that it successfully marketed the game to EA’s existing fans, including 10 million players of The Sims 3 game and 36 million social game players. More than 30 percent of The Sims 3 players are playing The Sims Social. But more than 60 percent of EA-Playfish fans of Restaurant City and Pet Society are also playing The Sims Social. That’s an impressive conversion rate, and it doesn’t hurt that EA has sold more than 140 million Sims games.

EA is enjoying a lot of success, now that it has more than 100 million monthly active users, more than double what it had just a few months ago. But EA is also cannibalizing its own social games. The average percent loss of total play time per week since the launch of The Sims Social in August has been heavy. The Sims 3 has seen its play time drop by 50 percent. Bejeweled Blitz from PopCap has declined 20 percent, and Pet Society has declined 50 percent. CityVille play time, by comparison, is down only 10 percent, while Zynga’s FarmVille is down around 25 percent and Zynga’s Empires & Allies is down about the same. 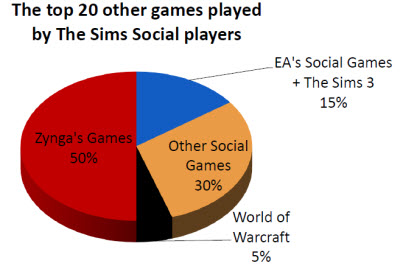 Prior to the launch of The Sims Social, EA had a terrible record in social games. In 2010, it purchased Playfish for as much as $400 million. That gave EA access to a team with proven expertise in social games. They applied their skills to The Sims Social. Now EA’s numbers are looking pretty good in terms of engagement, or how much time users spend in the game.

EA has a lot of new hope now that it has acquired PopCap Games (for at least $750 million). PopCap has a number of casual titles that can be converted to social games on Facebook. About 59 – 79 percent of the players for popular PopCap casual games are also playing social games on Facebook. Roughly 60 percent of Plants vs. Zombies players — a big PopCap franchise — are also playing social games. So PopCap’s audience  should be easier to funnel from casual web site games to social games. With PopCap, Raptr concludes, EA is poised to have strong follow-ups to The Sims Social.