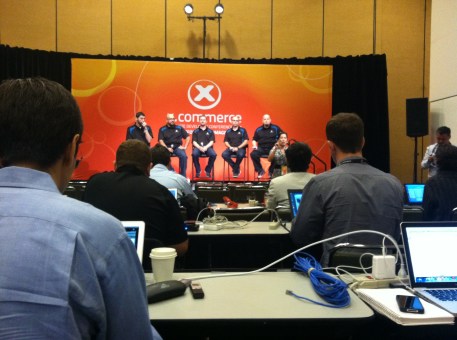 “[Facebook] wants to enable their developers to monetize,” said Naveed Anwar, head of community for X.commerce, in an interview with VentureBeat. “Who better to partner with than the people who are leading in social?”

Facebook recently introduced a new “vocabulary” to its open graph, a platform for developers on Facebook, which allows people to do more than just “like” something. Developers on X.commerce will now be able to use that extended vocabulary and the open graph in their own creations.

For instance, instead of liking Levi’s newest pair of jeans, it’s possible to have bought them, recommended them, and more. The idea is people are more influenced by their friends’ purchases than they are by official reviews from a source such as the Kelley Blue Book. If someone sees your action on a product, they may be more inclined to take action of their own.

“To make something truly social, you have to put it in at the start of the page, through to the end,” said Matthew Mengerink, vice president and general manager of X.commerce, at today’s press conference.

X.commerce wants to give developers access to Facebook at the very beginning and integrate it deeply into their applications. Mengerink explained developers could integrate Facebook features on the side, but having it baked into the X.commerce offering will make it a fuller product.

eBay also announced PayPal Access, which is a combination of Facebook Connect and the prompt you see to approve an app on Facebook. PayPal’s main concern is the loss of sale when the buyer has to fill out forms with shipping, contact, billing and other information. Access prompts you to share your pre-loaded PayPal credentials with an eCommerce website so it can remember you on return trips.

Commerce and social companies alike are recognizing the opportunities for marketing and purchasing in the retail world. eBay continues to deepen its relationship with Facebook. Last year the company announced PayPal would fuel all Facebook credits, and at the end of September it added Mitic as an advisor to its board of directors.

But eBay is not restricting itself to just Facebook. He explained, “We’re open and we’ll work with any partners who want to play in this ecosystem with us.”