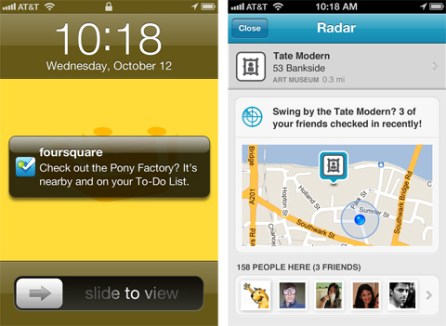 Using iOS 5’s new region monitoring functionality, the Radar feature sends alerts to users about things they are interested in whenever they are physically near the area. For instance, if a group of your friends are at the bar next door to you, Radar will shoot you a message letting you know. It also sends you alerts for things on all the Foursquare To-Do list you follow. The Foursquare app doesn’t have to be open for Radar to work, either.

“Radar is a big step in the direction of Foursquare’s vision,” wrote Foursquare Head of Product Alex Rainert on the company’s blog.

Not only does Radar add a new level of social interaction for its users, but the feature also has huge implications for Foursquare merchants. Local business owners now have a new tool to promote their venues and special deals that doesn’t rely entirely on people opting in — provided that users turn on Radar via their iOS device.

While Radar does add a lot to the user experience, it could take a long time to actually provide significant value, according to Nicholas Holland, CEO of Interactive development and marketing firm CentreSource.

“Basically, Foursquare is a hindsight service for the majority of people. You go somewhere and then think about checking in. With Radar, they have to be proactive. So, asking people to use your service in a new mental state is a challenge,” Holland said in an interview with VentureBeat.

Prior to Radar, users needed to physically check in to locations in order to see alerts about friends in the area or tips added to a To-Do list.

Holland said the Radar feature might require Foursquare to add some additional prompts to help users catch on to the benefits. But ultimately, Radar’s fate ultimately depends on “clever use cases”, he added. “If they abuse with advertising, it’s DOA. But since (Radar) is optional, it will start with early adopters and live/die by their experience.”

Foursquare said it plans to release the Radar feature on its other mobile apps in the future.