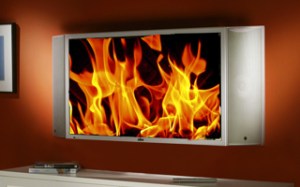 LCD television sets that spontaneously melt or catch on fire only sound awesome. In reality, they’re the kind of thing that can endanger and inconvenience consumers, and lead to product recalls.

Sony is recalling around 1.6 million of its Bravia TV sets for precisely that reason. A faulty component of sets sold since 2007 may lead in some cases to overheating, smoke, melting parts and even fire. Sony is offering in-home evaluations to Bravia TV owners and will repair defective components free of charge.

The defective part is an inverter transformer used for LCD backlights; the inverter can sometimes overheat and occasionally ignite. And when that happens, it can create a hole in the cabinet of the set.

So far, Sony is only admitting that 11 incidents of TV malfunctions of this nature have been reported since 2008, all in Japan. And according to Sony’s statement, no injuries have been reported yet. However, there are reports on Consumer Affairs’ website of fire-catching Sony Bravia TVs popping up as near as Hawaii and as recently as last month.

“I purchased a 40-inch Bravia Sony LCD TV in December of 2007 from Sears in Hilo, HI,” writes Dan, a consumer from Keaau, Hawaii. “It worked fine until two days ago. Then, it literally caught on fire. Smoke was coming out with an acrid smell… I called Sony customer support. The person that I talked to didn’t have the foggiest idea of what I was talking about and couldn’t care less. She would only send me a flyer that ‘would tell me what to do.'”

Disturbingly, owners of other flaming and melting Sony sets, such as the WEGA did report injuries including burns on the Consumer Affairs site. It seems unlikely that out of 1.6 million sets, no consumers have been burned or lost property due to the faulty components.

Sony is expected to announce recalls in the U.S. an Europe, as well.

Earlier today, we also reported that another division of Sony was suffering a bit of a meltdown, too. The PlayStation Network remains under attack, and so far, hackers have gained access to 93,000 accounts.

All in all, today hasn’t been a red-letter day for the consumer electronics company.