StumbleUpon’s service lets people discover and share new web content based on a broad spectrum of categories. Users click a “stumble” button to discover new content, and then have the option of voting and commenting on the selection. The service launched an Explore Box feature in August that allows people to get even more specific with how they seek out new web content.

The company, which had 10 million users in June 2010, attributes most of its user growth to a combination of new features, mobile usage and new employee talent, according to StumbleUpon VP of Business Development and Marketing Marc Leibowitz.

“There’s been more content sharing from everyone across the web, and I think people are turning to services to filter the fire hose of information that’s coming at them,” Leibowitz told VentureBeat. “So, I think we’re definitely benefiting.”

The company said it has more than doubled its number of monthly “stumbles” (the number of times someone finds content by clicking the stumble button) from 400 million in June 2010 to over a billion. That’s a thousand stumbles per second, StumbleUpon said.

StumbleUpon was acquired by eBay in 2007, only to be sold back two years later by original founders Garrett Camp, Geoff Smith and Ram Shriram, as well as Accel Partners and August Capital. StumbleUpon now operates as an independent company. The company closed a $17 million round of funding in May 2011 and has raised $18.5 million total funding to date. 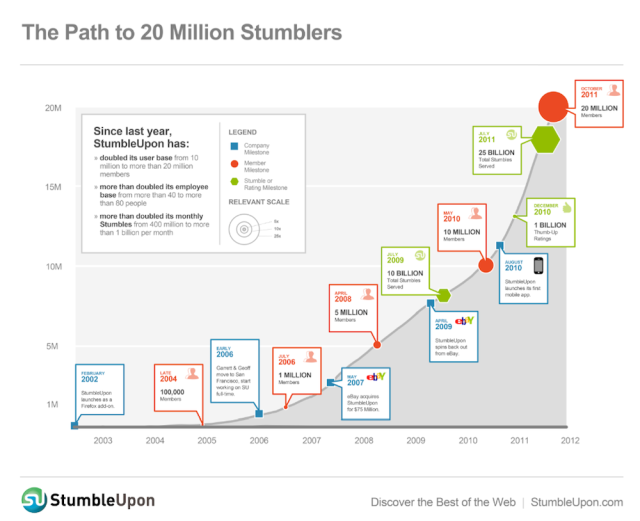