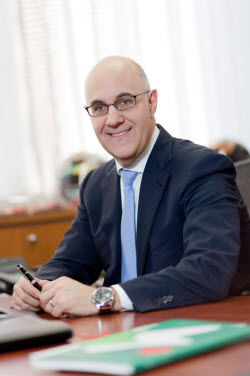 Mobile social games firm Ngmoco has hired a former Mattel executive, Michael Staskin, as its chief marketing officer. His job will be to ensure that the company’s broader ambitions of creating a worldwide mobile social entertainment network take off.

Staskin (pictured right) has more than 15 years of marketing and communications experience. He joins an Ngmoco executive team that includes founder/CEO Neil Young and the recently hired chief operating officer Joanna Drake Earl. Japan’s DeNA, operator of the Mogabe mobile social network, bought Ngmoco for up to $403 million last year, but it has given Ngmoco the autonomy to keep its own management team.

DeNA is generating $1.3 billion in revenues in Japan from the Mobage network with 30 million (mostly feature phone) users in Japan. But the company’s ambitions are a lot bigger than that. DeNA and Ngmoco launched Mobage in English on a worldwide beta test on Android smartphones in July.

The Mobage network will have mobile social games developed by Ngmoco, but it will also include games created by third parties. On top of that, the network will feature other kinds of mobile entertainment as well.

That is where Drake Earl, who has TV experience, and Staskin come in. Staskin will lead global marketing and communications efforts for Ngmoco, including the launch of Mobage.

Most recently, Staskin was vice president of marketing and communications at Sisal, the gaming and lottery giant based in Milan, Italy. He also held management positions in North America and Europe for Mattel. Young called Staskin a “world-class marketer” who has managed some of the world’s biggest brands on a global scale.

So far, Ngmoco hasn’t said how well the Mobage beta test is going. Some naysayers have said it isn’t catching on that well. But Ngmoco says it is not ready to release preliminary results.