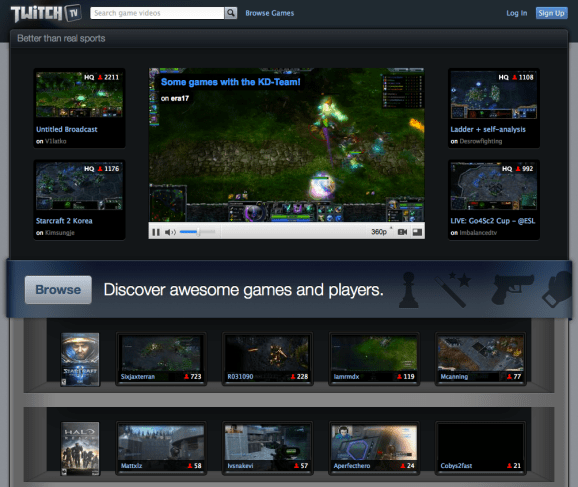 Any tournament run by ESL, including the upcoming Intel Extreme Masters tournaments, will be broadcast exclusively on Twitch.tv. That could bring a lot of potential visitors, since ESL is one of the oldest e-sports leagues in the world and has been running tournaments since the days of games like Counter Strike (which came out in 2003). The site has already picked up 80,000 concurrent viewers and expects to have around 100,000 concurrent active viewers on weekends with the new deal, Kan said.

“I think it’ll reach well over a million unique viewers across the entire weekend,” he said. “We’ve seen an enormous concurrent growth midweek, which tells us it’ll be gigantic.”

Electronic sports leagues, or e-sports, are already popular internationally — particularly in countries like South Korea, where players compete for tens of thousands of dollars in prize money in massive tournaments. The league has only grown slowly in the United States because it hasn’t achieved the same level of visibility that professional gaming has internationally. But a number of companies, like Justin.tv and game developers, are doing their part to bring more attention to professional gaming.

For example, Activision-Blizzard, the developer of Starcraft II: Wings of Liberty, cut a large chunk of content from that game and made it less graphically demanding to ensure that it would be a better vehicle for professional gamers. The company regularly holds massive tournaments at its annual conference in Anaheim, Calif. There is also a professional gaming league site called Major League Gaming that features clips from professional gaming matches and a forum where gamers can meet and schedule matches.

The company has also signed more than 500 competitive gamers into its revenue-sharing partner program. The program gives gamers that have generated a large number of followers on the site a way to make money off their video streams the same way popular YouTube publishers can make money with their videos. Those competitive gamers usually already have thousands of fans in the gaming community who closely follow their actions.

Justin.tv also has partnerships with other electronic sports leagues like the Global Starcraft League and Major League Gaming. The company also signed an exclusive broadcasting deal with Team Dignitas, one of the top electronic sports teams in the world that spans several games — including Starcraft 2: Wings of Liberty and World of Warcraft.