Zynga may be losing some ground after spending years completely dominating the Facebook social gaming market.

Facebook today announced that it is changing the way it counts the number of active users who access an application on its site, a move that will lower perceived values of monthly active users. The actual traffic to Facebook apps has not changed, but the new calculations should be more precise and transparent, a Facebook spokesperson told VentureBeat.

One of the sites affected is AppData, which tracks an app’s monthly active users and is widely used as a metric for gauging success of some social app companies.

With the new changes, Zynga’s (and other social app companies’) recorded monthly active users — as measured by Facebook’s metrics — could fall. Sources familiar with the situation told VentureBeat that the drop would be less than 20 percent. AppData currently reports Zynga has 263 million monthly active users.

A drop of 11 percent or more would bring the company below its own reported number of monthly active users, 232 million, which the company reported when it filed  to go public in July. (Zynga has not updated that number since then.) That would imply that Zynga has lost ground to social gaming companies like Electronic Arts and Wooga. Those companies are nowhere near Zynga in terms of users but are still top-ten developers, and have been slowly making inroads in social games.

“We support Facebook’s decision to change the way it measures the number of active users of its applications as it more accurately portrays the number of people who play Zynga games,” a Zynga spokesperson told VentureBeat. “As noted in our S-1 filing, we measure our player number on Facebook by how many people access our games and we are pleased that Facebook, and therefore AppData, will accurately reflect that number.”

With an IPO in the works, any perceived slow-down in the company’s growth could diminish its perceived value to potential public investors. Zynga is the most profitable high-profile company that has filed to go public this year and expectations are extremely high for the company now that it has hinted at plans to break away from Facebook. (It’s worth noting that VentureBeat’s Dean Takahashi had a story earlier that throws a little bit of skepticism on the company’s accounting practices.)

Zynga is still in an enviable position compared to other social gaming companies, which are not even remotely close to the social gaming behemoth. The company recently filed to go public in order to raise up to $1 billion and has delivered hit after hit game on Facebook. Zynga chief executive Mark Pincus played host to a few dozen press earlier this week as he unveiled 10 new games and Zynga Direct, the company’s new initiative geared toward distributing its games on any device without going through Facebook.

“It’s important to note that any traffic has changed from yesterday to today, it’s just what they are measuring,” Inside Network’s Justin Smith told VentureBeat (Inside Network runs AppData). “I think they’ll bring (the two values) closer in line.” 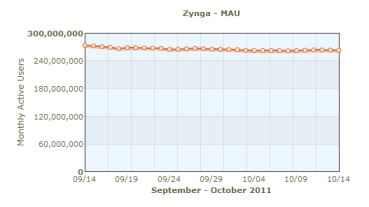 Zynga has loaded its cannon with its next Ville game, CastleVille, along with a bevy of other Facebook games. But it hasn’t struck gold in nearly a year since the company released CityVille, which is still the top app on Facebook and contributes around 76 million monthly active users to the company (that’s according to AppData, so that will probably fall when the time comes). FarmVille, one of its first games, has reliably held the second or third-place spot for the company, with its newer games coming and going rapidly as they come out.

For example, Empires and Allies held the number two spot for Zynga for a few months. But even that game had a short shelf life of five months before starting to peter out (though it still has 25.6 million monthly active users, again an enviable position). Adventure World appears to have filled the niche for Zynga’s other “top three” game — the company’s top games that account for around 59 percent of the company’s revenue. That strategy has held off a number of other social gaming companies, but Zynga for the first time faced significant competition from The Sims Social when Electronic Arts released it in September. (Also worth noting that The Sims Social’s growth has slowed and it doesn’t look like it will catch up to CityVille.)

Even by AppData’s current standards, Zynga hasn’t showed any significant growth or loss over the past 30 days. The changes should more or less drag that holding pattern lower than it currently is (as pictured above). But those numbers do not include what will become part of Zynga Direct, the company’s next plans for growth independent of Facebook. The company is still poised for significant growth if Project Z, the company’s planned independent gaming website, proves successful alongside Zynga Direct.