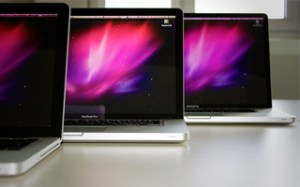 The laptops will be available soon in 13-inch, 15-inch and 17-inch screen sizes.

9to5mac reports that Apple will be shipping two versions of the two smaller sizes and that the new laptops are appearing in internal inventory documents as K90IA, K91A and K92A, in ascending order by size. This information comes to the blog from an anonymous source.

Even though this comes fast on the heels of the recent MacBook Pro refresh that put slightly faster processors into the laptops, we’re not too surprised, since new models were expected to arrive in 2o12.

Currently, the 15-inch and 17-inch MacBook Pro models contain 2Ghz to 2.3 Ghz chips, while the 13-inch MacBook Pro is running at 2.7Ghz. But the recently announced new hardware will bring Intel’s newest Sandy Bridge processors to the laptops. That announcement came just after Intel released its Core i7 Sandy Bridge processors, including quad-core 2.4 gigahertz, 2.5Ghz and 2.7Ghz chips.

The new models may or may not also include Bluetooth 4.0 technology, which Apple recently introduced on its iPhone 4S and the latest MacBook Air.

The MacBook Pro line last got a facelift back in February, when the current processors and Thunderbolt high-speed data ports were introduced. Although the new models were expected, it is a bit surprising to see this upgrade come so quickly after the Sandy Bridge upgrade; however, we’ve speculated in the past that the new-new processors are needed to keep the line current.

The MacBook Air and mini also got upgraded over the summer to feature Intel’s Sandy Bridge processors as well as Thunderbolt ports.