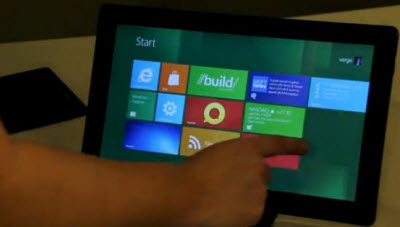 We managed to get our hands on one of the upcoming Windows 8 operating system tablets from Microsoft. The tablets, which Microsoft showed off at its recent Build developer conference, will be coming out next year, so we’ve put together a video (below) of what you can expect from them.

The tablet we looked at is a Series 7 Slate made by Samsung. You can use the tablet as a full-fledged PC, running the familiar Windows-like user interface. But you can make things happen on the screen by tapping them with your finger.

The really cool part happens when you press the main button on the tablet and it shifts the display into the Metro user interface (pictured). The Metro interface has big icons that are much easier to hit when you’re navigating with your fingers. They’re colorful and easy to look at, much like the tiles in the Windows Phone 7 software that runs on Microsoft-based smartphones.

Metro is the beginning of a consistent user interface that can now be shared across the PC, tablets, smartphones and even the Xbox Live online gaming service and Xbox 360 game console. You can swipe horizontally to make the tiles move quickly from side to side so that you can navigate quickly. The Metro interface has bold white type that you can see from far away against the colorful backgrounds.

The software was running on a big Series 7 tablet with an 11.6-inch capacitive touchscreen. It runs on a beefy Intel 1.6-gigahertz Core i5 microprocessor with integrated graphics. It has connectivity with 802.11b/g/n WiFi. It has a universal serial bus 2.o (USB) port and a micro HDMI socket so you can connect it to a TV. That’s a lot more hardware firepower than you find in a typical tablet. But it was certainly enough to run the tablet at full speed. You can play a cute piano app on the touchscreen or run Microsoft Excel.

The Metro interface is cool because you can personalize the tiles so they display what you want, such as the weather in your home town. You can easily access your Twitter or Facebook accounts. You can swipe your finger on the edge of the screen to call up a bunch of functions such as search or share. That search function will let you search not only the whole computer, but a particular app as well.

You can lock the screen with a password, PIN number, or a picture password. The virtual keyboard can be used for typing, but I am hoping that Microsoft makes the icon for the keyboard bigger. That’s also the big problem with using the Windows interface on the tablet. Most of the little buttons are too small for you to hit with your finger accurately.

It’s an interesting take on doing software for a tablet. I’m not sure that having a single user interface will work across so many devices. But Microsoft is banking that if you become familiar with one of its user interfaces, you will be able to easily learn all of the others as well, from console to tablet. That’s not bad for a grand scheme to catch up with Apple.

Check out our video of the Windows 8 tablet below. (Note that I misspoke and called it a Samsung Galaxy tablet. And also note that this developer release only shows a small portion of what will be in a final Windows 8 tablet).