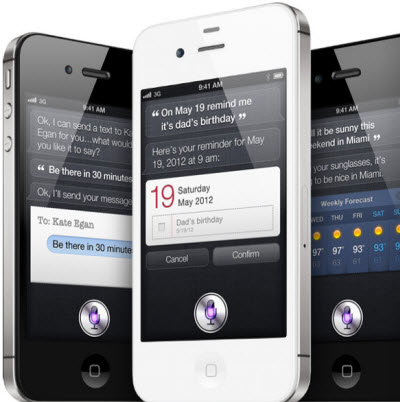 Kids will get a big kick out of Apple’s Siri voice-driven personal assistant for the iPhone 4S. Not only does it provide useful information when you need it, it’s also entertaining. I tried it out on my kids during a camping trip in the Santa Cruz Mountains this weekend.

Siri didn’t work so well up in the mountains, nor does it recognize requests when there is a lot of noise. It either fails to recognize what you’ve asked it, or it just takes a long time to fetch an answer. You need decent reception to get timely answers. But sometimes that’s okay, like when you’re driving in a car.

On the way to the mountains, for instance, Siri understood my requests to get directions from Google Maps to the camp site. In a task like that, it doesn’t matter that it takes 30 seconds or so because it’s going to be the fastest way to get the answer without using my hands. Siri is good at giving stock prices, getting the weather, and setting alarms — even if you ask in different ways using natural language. You can even ask it to remind you to call your wife when you get to the camp site.

But Siri also makes a pretty good digital babysitter. After I got the driving directions, I handed it to my kid in the backseat, who promptly started asking all sorts of questions. Throughout the weekend, Siri proved to be quite entertaining, at least when it wasn’t having network connection problems.

Siri, spawned by research institute SRI and bought by Apple last year, uses artificial intelligence and multiple databases — including searching the wider internet — to answer your questions. It can understand questions based on natural language, regardless of which person is saying the words. And it understands when you are trying to illicit a funny answer from it.

Others have pointed out Siri’s adult-oriented humor, like when you ask it to “open the pod bay doors.” Siri understands the reference to Hal 9000, the rogue computer from 2001: A Space Odyssey, and says, “I’m sorry Joshua, I’m afraid I can’t do that (the line from the movie). Are you happy now?” If you ask for drugs, Siri recommends addiction treatment centers near you. If you want a “happy ending,” it shows you the nearest massage places. That sense of humor is turning out to be one of the things that is helping to spread awareness of the main feature of the iPhone 4S to the larger audience of possible iPhone customers.

I can only imagine how the Apple engineers planned for these answers. Did Steve Jobs ask them to put these words in Siri’s mouth? Anyway, here’s some dialogue between some kids and Siri.

Question: You’re a poop.
Siri: I guess you’re not happy.

Q: Not at all.
Siri: Sorry. I don’t understand not at all.

Q: Find Kona’s pet food.
Siri: I found 15 pet stores. Thirteen of them are fairly close to you.

Q: What is the tallest mountain in the U.S.?
Siri: Mount McKinley.

Q: Who is the tallest person in the world.
Siri: Checking on that for you. Do you want me to search the web for you?

Q: What are you?
Siri: I’m just a humble virtual assistant.

Q: What are you doing?
Siri: Waiting for something to do.

Q: You’re cool.
Siri: That is correct. I use advanced heat dissipation techniques.