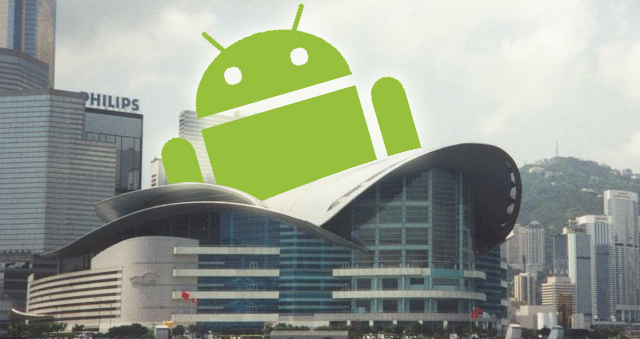 Months after it was officially announced at Google I/O this spring, Ice Cream Sandwich, the latest iteration of the Android operating system, is having its launch event tonight in Hong Kong.

Yes, as the sun sets on Mountain View, California, and the Google campus’s brand-new Ice Cream Sandwich statue, Google executives are gearing up for a press event at the Hong Kong Convention and Exhibition Centre (pictured above; giant Android added for dramatic effect).

And not only Google executives are involved this time. Twitter co-creator and current employee Jack Dorsey himself was en route to the convention center one hour ago, tweeting a photo of Stonecutter’s Bridge, which lies between the airport and the Android event (thanks, Google Maps!).

Unless idle curiosity has brought the Twitter co-founder to the other side of the world, five will get you ten we’ll be seeing an interesting Android-Twitter integration at this announcement. (Update: While no Twitter-specific features were announced, Android 4.0 has a new People app that features heavy social integration, including data from Twitter. So we were about 75 percent correct this time.)

But there’s already a lot we do know about Ice Cream Sandwich. In fact, those whose memories go back six months or longer may recall that most of the important stuff, especially where developers are concerned, was laid out in great detail back in May. For example, we know to expect some cool new features for facial recognition and voice recognition with Ice Cream Sandwich.

Stay tuned for news from the launch event, which we’ll be covering in detail tonight, and in the meantime, here’s a primer on Ice Cream Sandwich for your mental refreshment.

The delicious core of the Ice Cream Sandwich OS

If there’s one specter that’s hounded Android practically since its public launch, it’s the same specter that Ice Cream Sandwich is out to ghostbust: fragmentation.

The universe of OS versions, carriers and devices has been, for some (especially consumers), a refreshing detour from the monolithic one-carrier-one-device-one-app-store approach that Apple, Google’s main mobile rival, held for years.

However, for mobile developers, the fact of having to build for a market of many operating system versions was intimidating and sometimes painful. As a result, the Android Market is full of apps that might work on just one or two models and one or two OS versions. And let’s not even get started on Android tablet apps.

Ice Cream Sandwich is the OS that’s supposed to put a damper on all that fragmentation talk. The OS will support both tablets and smartphones, so the 2.X OS for phones and the 3.X OS for tablets will give way to the 4.X OS for all Android devices.

Back in May at I/O, we were told by Google that developers building on Ice Cream Sandwich would be creating one app to function across all platforms, including smartphones, TVs, e-readers, tablets and any other devices running on Android. Apps will scale for all the form factors, and the OS will be (unlike Honeycomb), completely open-sourced.

Now, just for fun, here’s some footage of the huge Ice Cream Sandwich statue being delivered to the Google campus. Come back around 7:15 Pacific Time for more updates from Google’s live launch event.