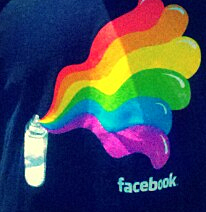 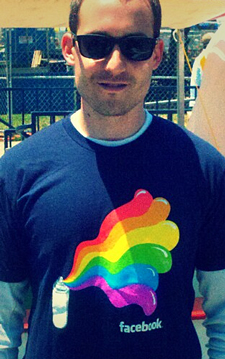 GLAAD (that’s the Gay & Lesbian Alliance Against Defamation) is promoting Spirit Day this Thursday, Oct. 20, and encouraging folks to wear purple and display that color on their online profiles. In response, Facebook and other companies are “going purple” for the day.

Diversity in tech is never more contentious than when sexual preference is brought into the mix. So why would major tech companies like Facebook, AT&T, Yahoo, HP and actively celebrate LGBT diversity?

Facebook has a history of working with the LGBT community on larger issues, particularly since last year’s rash of news-making suicides related to the bullying of homosexual teens and young adults.

A lot of this kind of bullying now takes place online; many of the largest and most powerful properties on the web perceived an obligation to put a stop to such behavior.

“Facebook believes in addressing safety issues proactively — and building a trusted environment is fundamental to our mission and to ensuring a positive experience for people who use our site,” Facebook representative Andrew Noyes told VentureBeat in an email.

Spirit Day was begun last year by teenager Brittany McMillan; the purple in the rainbow flag is a symbol of spirit. The day is recognized by corporations, media, schools and individuals around the world. GLAAD says the goal and focus of Spirit Day is “to create a world in which LGBT teens are celebrated and accepted for who they are.”

Anti-bullying campaigns such as It Gets Better and MTV’s A Thin Line were sparked last fall in response to the issue of online anti-gay behavior. Though the movement may seem to have lost some of its momentum, awareness around and responses to online bullying, especially on Facebook, has dramatically increased since last year.

“Just last month, we convened a meeting of our LGBT Network of Support at Facebook headquarters to mark the one year anniversary of the group’s formation,” said Noyes. “The panel, comprised of leading LGBT advocacy organizations … was formed in October 2010 in the wake of several high profile LGBT bullying incidents and suicides. Since that time, our Network of Support has served in a consultative capacity to help Facebook effectively address issues faced by the LGBT community.”

Facebook’s Network of Support includes organizations such as GLAAD, GLSEN, HRC, PFLAG and the Trevor Project.

The social network also launched the Stop Bullying: Speak Up social pledge with Time Warner. This Facebook app helps teachers, students and parents make personal commitments to help stop bullying and to get others to join them.

“More than 80,000 people have taken the pledge, and more than 800,000 people have liked the Stop Bullying: Speak Up Facebook page,” said Noyes. “We also worked with Time Warner and CNN on an Anderson Cooper 360° Town Hall special on bullying, which premiered Sunday, October 9.”

For Spirit Day, Facebook is distributing Spirit Day information to its staff members around the world. The company’s Facebook Diversity and Facebook Safety pages will also turn purple for the day.

Yahoo will be holding photo shoots on Spirit Day around its U.S. offices, and the company promoted Spirit Day on its blog and the Yahoo Pride Facebook fan page.

AT&T is sending information to its 260,000 employees to encourage them to wear purple on Spirit Day, and the company’s headquarters will be lit in purple on the 20th.