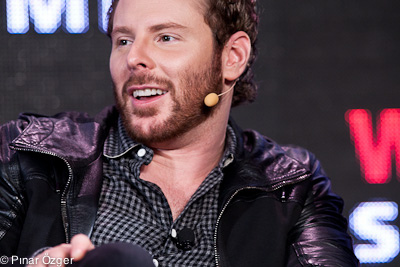 Sean Parker began his tour in the Internet spotlight by blowing up the music industry, and it apparently became sort of a hobby for the serial entrepreneur.

He co-founded Napster in 1999; a decade and change later, he’s taking on the industry from a new angle as an investor in and board member at Spotify.

Ever since music changed from a physical medium to a digital medium, Parker has been disrupting the space and trying to figure out what shape the record industry might take next. In the past, Parker has said that what Spotify has become lives up to his original vision for Napster.

“I think we’re all trying to figure out what is the ‘next’ music industry, and I think the guys at the record labels are just as confused about that as the rest of us,” Parker told the audience at Web 2.0 Summit in San Francisco yesterday.

A new kind of record label

In the good old days of physical music — LPs, 7-inch singles and cassette tapes — manufacturing, distributing and retailing music took a lot of planning, time and money, Parker noted. With the advent of digital distribution, he said, “Suddenly, one of the primary limitations on the ability to release an unlimited number of artists in a year goes away.”

Distribution isn’t the only roadblock that’s melted away over the past few years. “Look at the fact that promotional methods [such as radio] were extremely limited,” said Parker. “Then, you look at MTV — even more limited … The record labels hated it, because it controlled their destiny.”

However, in today’s brave new world, where kids run around with MP3 players instead of transistor radios, even promoting and collecting music has changed.

“Because of platforms like Spotify, you can consume music, share music, build a collection, without ever having bought the music,” said Parker, whose forays into that territory terrified, enraged and panicked the music industry back in the late 1990s and early 200s.

“You can sample on an unlimited basis. It costs nothing to make each additional copy. And you find out about music primarily through your friends.”

As for finding new music, Parker places a lot of emphasis on Facebook. While he said that Spotify was and is a neutral platform and has the same terms with Facebook as it has with its other digital media partners, he also noted, “Facebook has always been a great promulgator of information … you saw this with video from YouTube, spreading virally. But because of copyright issues, there was no way to enable that same kind of virality for music.

“So the dream with Spotify was to integrate with Facebook so that viral distribution could be brought to the music industry.”

Of course, with digitization and the onset of Internet culture, facets of the business from promotion to A&R (that’s artists and repertoire, the process of finding new bands to sign) have also undergone huge changes. “All of these historic limitations that basically created and defined the dynamics of the record business no longer exist, so all the departments within a record label don’t make sense anymore,” Parker told the Web 2.0 crowd.

A new kind of band

On the flip side of that coin, bands these days have a drastically different experience.

Rather than gigging around town and hoping an A&R rep catches and loves your show, musicians are building up grassroots fanbases online, making and selling their own merchandise and generally finding ways to promote their music with or without help from the music-selling machines within a record label.

Parker equated the old way of picking and promoting “star” acts to pulling back and snapping a rubber band; the intial investment took some time, but once it was released, it flew.

“You could take an artist from zero to number one pretty reliably with a high rate of predictability, and you could do it over and over. Now, it takes a lot to make it,” he said.

And for many bands, Parker said, getting things done for yourself is a big part of the new paradigm.

“There’s this DIY, indie notion that you’re the master of your own destiny,” he said. “If you’re not in dire straits and you’re a functional person with a day job, you can pull yourself up by your bootstraps.”

Is disruptive online TV coming next?

Parker said that he spends his time time these days pretty evenly between Spotify and Airtime, a stealth project he’s working on with Napster co-founder Shawn Fanning.

Airtime has received an initial $8.3 million round of institutional funding from major Silicon Valley VC firms and big-name angels. Given the provenance of its co-founders, we’re hardly surprised.

“We can’t talk about what the product does or will do,” said Parker to Web 2.0 Summit attendees.

However, it has been suggested by the local rumor mill that the startup will have something to do with video content. Parker did say, “It’s so annoying that even on-demand TV is so screwed up,” but he didn’t specifically link this statement to his intentions with Airtime.