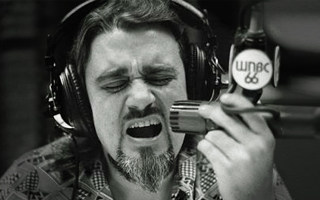 Aol Radio has relaunched. With all the buzz around super-social music apps like Spotify and Turntable.fm, you’d think the company would have jumped on that trendy bandwagon. But the new Aol Radio will be powered by Slacker Radio. While there will be some social integrations in a few months, social media is not a primary source of data for an programmatic, algorithmic approach to serving up songs.

In a chat this morning with Slacker CEO Jim Cady, we talked about why Aol Radio will be professionally rather than socially curated and why music (and news and sports) experts make better DJs.

First, Cady noted that Slacker is “keenly interested in building a complete radio service, not just music,” something that differentiates both Slacker and Aol Radio from the headline-making competition.

“We have comedy, sports, news — it’s a little more like true radio,” he said.

The relaunched Aol Radio features a Slacker interface. It will also come with 50 percent less advertising, new custom artist stations, ESPN Radio, ABC News and a handful of other features.

“I think this is a first step in a larger approach for us,” said Cady of the partnership’s affect on Slacker’s audience. “We want to broaden our reach. There are a lot of places where people congregate to explore, and Aol is one of those places.”

Currently, Slacker has more than 30 million registered users and around 400,000 paying subscribers.

We asked Cady how the older, wiser Slacker was prepared to compete with tech darlings like Pandora, Spotify and their ilk. “We feel very competitive in the space,” he told us.

“Spotify is very focused on on-demand, lean-forward service. We’re really focused on a lean-back radio experience. And we do it differently than Pandora, a blend of technology and human curation. Our stations are actually built by people, and it’s completely different than either of those services.”

And here we get to the crux of the matter: Should online radio be driven by recommendations from friends and computer algorithms or, as it was in the grand old days of real radio, by taste-making DJs with impeccable ears and high levels of access to new, amazing music?

“There are people that find things through their friends,” Cady said. “And for others, their friends don’t share their taste, and that’s challenging. That’s why we focus on professional curation.”

Aol Radio as powered by Slacker will offer more than 200 radio stations programmed by music directors, including award-winning DJs and professional music critics.

As an example, Cady mentions a Slacker station called 20 Years of Grunge. “It’s done by someone who was directly affiliated with Nirvana,” he told us. “And our users tell us he has a much better understanding of the genre than their friends do.”

With hand-crafted stations, Cady said, “At least you start with something that’s really well crafted by a professional who’s active in the space. If it’s all social recommendation, we’ll all end up listening to the top 40, and that’s not too interesting to me.”

Lest you think that Cady is an antisocial curmudgeon like your correspondent here, Slacker was part of the Facebook music integration recently announced at f8, the social network’s developer conference. So the company definitely has a hand in the world of social radio; it just thinks that pros do a better job at music curation than your friends.

Think about it: Would you let your friends fix your car? Perform your surgery? Build the next airplane you ride? If music is something you take very seriously, perhaps you should reconsider where your music comes from, too.