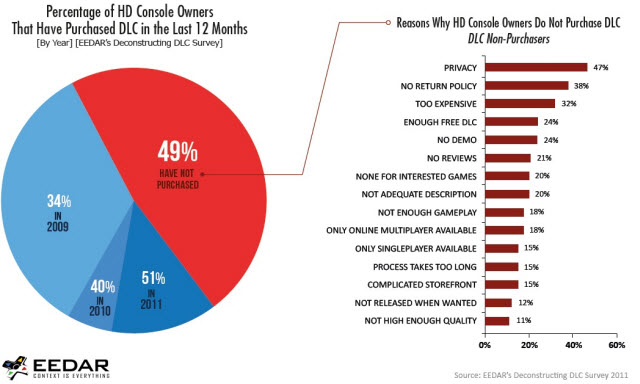 Video game console owners are purchasing more and more downloadable content, according to a survey by market analyst firm EER.

More than 51 percent of owners of the Xbox 360 and PlayStation 3 have purchased downloadable content (DLC), or games such as expansion packs or indie games that can be downloaded in digital form over the internet to a console, in the past 12 months. That compares to 40 percent in 2010 and 34 percent in 2009.

EEDAR, based in Carlsbad, Calif., estimates that downloadable content will generate more than $875 million in revenue in North America in 2011. Jesse Divnich, analyst at EEDAR, also predicts that North American DLC revenue will top $1 billion in 2012.

Users are downloading more content because of factors such as better broadband speeds and an increase in DLC marketing. Among those who don’t download DLC, privacy remains the No. 1 concern. Privacy was cited by 47 percent of gamers who said they do not purchase DLC. About 11 percent of the non-purchasers cited poor quality as the reason they don’t buy. Other barriers include a no-return policy, high costs, no demo, and a lack of free content. To overcome these impediments, EEDAR says publishers, developers and console manufacturers should work together.

If those non-purchasers actually bought something, that would generate $600 million more in revenue in North America each year.