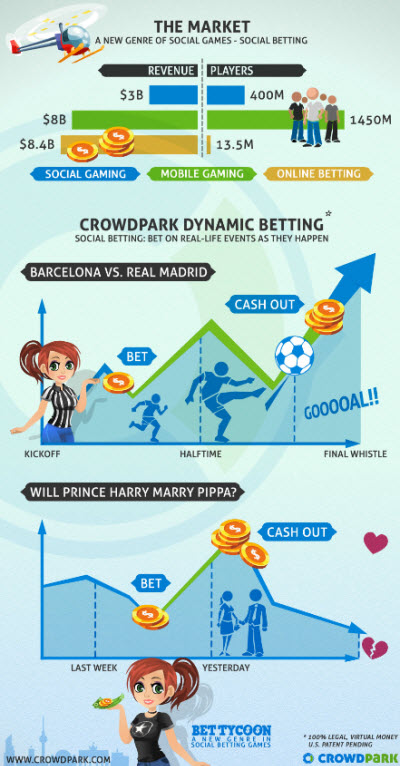 Crowdpark has raised $6 million for its social betting games business, it said today. Will Netflix’s CEO get fired? Will the economy tank in 2012? Will Mitt Romney snag the Republican presidential nomination? All of these topics are fair game for Crowdpark’s “dynamic betting” platform, where you can make wagers — with virtual currency — on just about anything.

“It basically works like a stock market, and we think it’s a game changer,” said Ingo Hinterding, co-founder and chief product officer at Crowdpark, in an interview. “It’s all in real time and based on real-life events. Whatever happens in real life, you can bet on it.”

The business seems like gambling, but it isn’t. You wager virtual currency that you purchase with real money. But you can’t cash out of the game. Rather, you get status and reward points for your skillful predictions. Users can compete against each other in betting events. They can bet on real-life events in sports, entertainment, news, technology and other topics. They can change a bet at any time and can craft their own personal bets and share them with friends.

The company’s first game, Bet Tycoon, has about 500,000 active users on Facebook. (The count was at 1 million users before Facebook changed the way it counts gamers). The game launched in February and is popular in a number of countries.

The Crowdpark Social Betting Index represents the collective wisdom of Crowdpark’s users and it shows how users collectively feel about top-trending predictions. The index will give observers a sense of where public sentiment lies on major questions, like whether Mubarak will get the death penalty in Egypt.

Hinterding said that the company has defined an entirely new genre of games on Facebook.

Crowdpark plans to hire new people with the money and develop new products. The Berlin-based company has already opened an office in San Francisco. Hinterding said the company is exploring related games such as casino games and taking the game to other platforms.

To date, the company has raised $8 million. Crowdpark was founded in 2009 and is led by Hinterding, Martin Frindt and Christoph Jenke. Both Jantz and Nagel said that Berlin is a great city for game investments because of its low costs, good talent, and wealth of other game companies. The company is one of more than 130 game developers, publishers and service providers in Berlin.

Crowdpark has 20 employees. Rivals on a broad level include Zynga, but there are no direct competitors on Facebook. While prediction markets are similar, they usually aren’t real-time in nature.