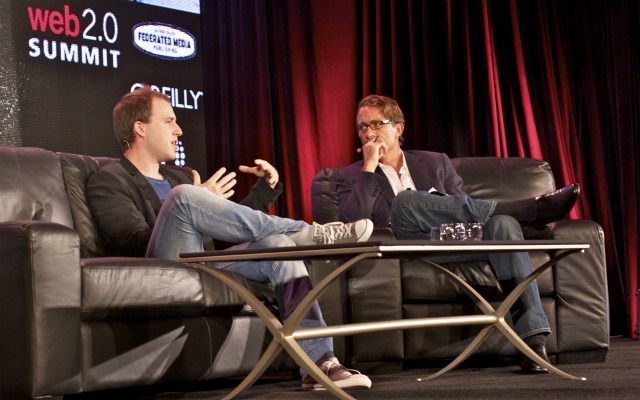 “Every service is better when it’s social,”  he said. Apparently that dictum doesn’t apply, however, when it comes to services like Facebook and Google+ socializing with each other.

The sitdown with Taylor followed closely on the heels of a conversation with Google co-founder Sergey Brin and Vic Gundotra, the lead engineer on Google+.

“Are you guys and Google going to get over it, and start sharing?” asked Federated Media founder John Battelle, the host of the Web 2.0 Summit.

“Sharing, what do you mean?” replied Taylor.

Battelle wanted to know whether there could be a mutually beneficial arrangement where data flows between Facebook and Google. For example, populating one’s Google+ network with Facebook contacts is one clear use case. However, based on today’s conversation, that kind of integration seems unlikely, at least for now.

Google has made several less-than-successful attempt to challenge Facebook’s social networking dominance, which means the two companies are competitors. But the reasons Taylor cited were technical rather than strategic.

“Data portability is very easy in the context of single-user services,” said Taylor. However, everything Facebook and Google do happens at massive scale. Should your personal phone number or email be available to other services just because you shared it on one platform? These are among the issues that stand in the way of social data portability, he said.

While Facebook continues to poach anyone it can from Google, not many people understand the internal workings of both companies better than Taylor, who came to Facebook after his company FriendFeed was acquired in 2009. Prior to his experience as a founder, Taylor was a prolific member of the Google team, working on more the launch of more than 25 products, including Google Maps and the Google Web Toolkit.

In his role as CTO of Facebook, Taylor has largely avoided the temptation to take shots at his former employer, though the afternoon was not free from provocation.

“There’s a reason why not every thought in your head comes out of your mouth,” said Gundotra in reference to Facebook’s frictionless sharing on the Open Graph, which was a key feature of the Facebook platform updates announced at the f8 conference in September. Central to the Google+ experience are its granular privacy controls, which are intended to be easier to manage than Facebook’s. When questioned, Taylor said that most heavy Facebook users are tweaking their privacy settings regularly, and that most college students are well aware of what they’re sharing with their dorm mates versus their family members.

But any integration of Facebook and Google+ data seems unlikely for a more basic reason. While Google+ is making impressive strides bringing social to what Google does best, such as Maps, and a broad list of products, Facebook has long seen itself as a platform, and not a destination.

When a question was asked how Facebook could avoid ending up dead on its back, Taylor answered that Mark Zuckerberg’s focus has been on Facebook as a service, and not just a destination. Facebook enables many of the services Taylor says already uses to be social. As an example, Taylor said that Facebook is integrated into his Xbox, so that he can easily post pictures of a in-game car crashes to his friends.

Google+ has quite a mountain to climb before it becomes the development platform of choice to make “everything social.”