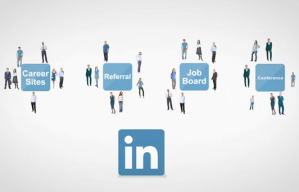 The recruitment process used by many recruiters of major companies involves watching several social media activity feeds for talent leads, gathering resumes from multiple job board services and communicating with potential hires. The idea behind Talent Pipeline is to streamline all the job recruiting elements into a single database of information, which can be searched, organized and monitored.

The service lets recruiters import leads and resumes from any source (message boards, job postings, personal referrals and more), which can then be organized using tags, sources, status updates and custom search reports. Since Talent Pipeline matches all recruiting data within LinkedIn’s database of profiles, it makes the process of monitoring potential hires much easier as well. This also helps adds more passive job seekers to the mixed based on their qualifications rather than the need to find employment.

In addition to grabbing talent from outside the company, recruiters can use Talent Pipeline to fill positions in-house (people currently employed by the company) as well as making it easier for current employees to discover new promotion opportunities, according to LinkedIn. The company is working with recruiters from several large businesses — such as PepsiCo, Pfizer, Red Hat, First Citizens Bank and Netflix — to develop the new service.

At first glance, Pipeline seems like an excellent way for larger companies to optimize their hiring processes, but it could alienate recruiting firms and headhunting services. LinkedIn, however, benefits regardless because it increases the need for job seekers to create and maintain a profile on its social network.

“(Talent) Pipeline will be great for recruiters who are getting back in to the field and some of the less-experienced recruiters. Senior level recruiters probably won’t have much use for it because they already know their way around the block,” said Scott Gordon, partner at technology recruiting firm VACO. “But, I will say that LinkedIn needs to be careful on how they go about letting recruiters contact people with job offers, especially when they’re not looking for a new position. It could end up annoying a lot of people, who aren’t used to dealing with recruiters on LinkedIn.”

Gordon also said that LinkedIn users are likely to become more observant of their contact preferences — un-checking the “contact me about employment opportunities” box if recruitment messages become too much like spam.

The pro social network has good reason for growing its Hiring Solutions business, which brought in $58.6 million in revenue in the second quarter of 2011 and 48 percent of LinkedIn’s total revenue. According to a New York Times report, the company considers the recruiting industry as a fragmented global market worth $85 billion.

This is also not the first step the company has made in growing its presence in the Hiring Solutions market. In June, LinkedIn released a new plug-in allowing job seekers to apply for available positions directly on an employer’s website.

Talent Pipeline will be available in the first half of 2012, according to LinkedIn. The company has yet to release information about the cost of the service.

Check out LinkedIn’s video pitch for Talent Pipeline embedded below.