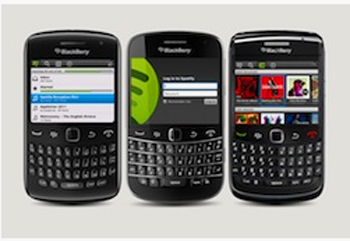 Streaming music service Spotify has finally launched an application to bring its service to BlackBerry owners who love having access to copious amounts of music.

Spotify has seen substantial growth in its revenue and number of paid subscribers since its launch in the U.S. in July. As of October, the service has more than five million active users, with two million paying subscribers. On the mobile side, it’s not doing quite as well: It offers somewhat mediocre iOS and Android apps that sync with playlists you’ve made using the PC or Mac application.

But the company has been really far behind when it comes to providing an application to BlackBerry users, whereas streaming music competitors like Rdio and Rhapsody have offered a BB app for some time. Although Research in Motion and the BlackBerry brand look a little tired next to what Apple and Google are serving up, there are still a huge number of BlackBerry users out there that might be willing to give Spotify a spin.

Many BlackBerry users can now download a preview version of Spotify’s app direct from Spotify, with inclusion of the app to BlackBerry App World coming soon.

Unfortunately, the app is only available to select BlackBerrys at this time. The app works for users running phones on GSM networks (AT&T and T-Mobile in the U.S.) and only works on the following models: 9780 Bold, 9700 Bold, 9300 Curve, 9000 Bold, and 8520 Curve. (Hopefully Spotify will quickly add more models to this list.)

To use the application, you must have a premium subscription to Spotify, which runs $10 a month for mobile access on top of PC and Mac access.

Personally, I see Spotify as one of top streaming music services going today, along with MOG, Rdio and Rhapsody. Hopefully the company is looking to improve its mobile applications to keep pace with its competitors.

Spotify has raised about $120 million in funding so far and is valued around $1 billion. It raised a round of financing earlier this year from Russia’s DST, the investment company that has previously backed Facebook, Groupon and Zynga.