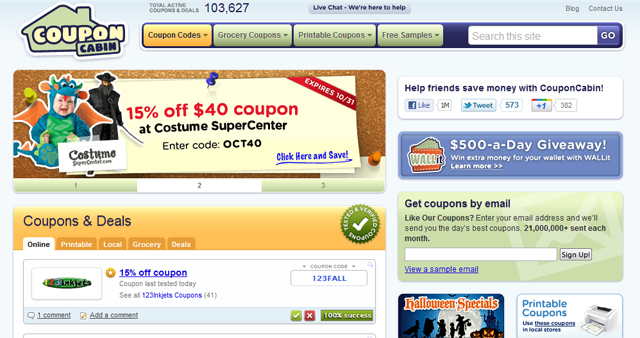 Coupons.com may have raised $30 million just a few weeks ago, but CouponCabin has leapfrogged that with a whopping $54 million first round of funding, with the goal of expanding its offerings and the number of merchants it works with.

CouponCabin differentiates itself from other coupon sites by continuing to verify whether the coupons it offers actually still work, something its user base likely appreciates. They’re so committed to quality coupons that if a user tries to use a coupon that is no longer valid and reports it, the company will give he or she a $25 gift card. Retailers the company offers coupons for include Target, Dell, RadioShack, Best Buy, Champs Sports, Home Depot, Kohls and Kmart.

The company said the funding will go toward building up its consumer base and focus more on grocery stores and local businesses.

“Among other initiatives, this investment will enable us to grow our local, grocery and printable coupon offerings, making us the deepest and broadest consumer destination for coupons on the web,” said CouponCabin founder and CEO Scott Kluth in a statement. “This investment will also help us better engage with more than one million fans on Facebook.”

CouponCabin’s round was led by growth equity firm JMI Equity, which has also invested in online firms like DoubleClick, Adknowledge, Business.com and DoubleVerify. JMI Equity will hold a minority stake in CouponCabin thanks to the investment.

Whiting, Ind.-based CouponCabin was founded in 2003. Last year, CouponCabin generated $500 million in online retail sales for its wide range of merchants, and it claims to have saved users more than $300 million since 2003. In 2011, the company has posted more than 100,000 offers from more than 3,500 stores.