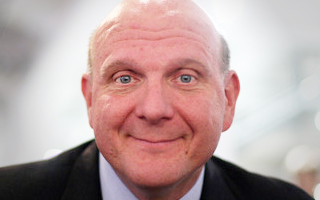 Microsoft executives gave some details and forward-looking statements about the company’s business — both the high points and the struggles — in an earnings call this afternoon. And it looks like Steve Ballmer is still doing a great job.

Microsoft posted record earnings for the most recent quarter — $17.37 billion, a figure that represents 7 percent year-over-year growth. All things considered, you can credit the growth to business tools (including big, boring server tech) and games (including the new exciting Gears of War 3).

It’s the same story, roughly, from the beginning of this year: Microsoft is winning in business tech and games tech.

Enterprise sales didn’t fare too well in the Q3 earnings report, but as Chief Financial Officer Peter Klein noted at the time, “We have a great product pipeline. We don’t have visibility into exactly what business spending will be, so we’re just going to have to work through that in the next couple quarters.”

And work through it they did. This quarter, the Business division earned $5.62 billion, and the Servers & Tools division posted $4.25 billion. Together, these two areas accounted for around 57 percent of Microsoft’s total revenues.

“PC sales to emerging markets continued to outpace other markets,” said Bill Koefoed, general manager, investor relations. This finding is similar to what Intel revealed in its earnings this year. “As we look toward to holiday season, we’re particularly excited about Ultrabooks,” said Klein, referring to the super-thin laptops from Intel.

Both Koefoed and Klein had positive remarks on Office 365, the company’s end-to-end cloud service for businesses, which encompasses not only its desktop Office software, but also its server software, such as Exchange and SharePoint.

Games has been quite a bright spot for the company for some time now, with Xbox’s popularity only growing with the availability of the controller-free Kinect hardware.

“There will be over 70 Kinect titles available for the holidays,” said Koefeld, noting that TV content for Xbox Live is also coming in the next couple months. “We believe we have the most compelling entertainment offering in the living room,” he said.

Keep in mind that corporate signings tend to be cyclical. One great quarter for enterprise sales doesn’t necessarily guarantee repeat performances throughout the year. Klein stated the company expects unearned revenue to follow seasonal norms throughout the fiscal year.

What about Windows Phone 7? Are we still looking at a potential sleeper hit, or is Microsoft ready to talk numbers?

“We are well positioned to become the third mobile ecosystem,” said Klein. Koefoed added, “We also signed a broad agreement with Samsung on the development and marketing of Windows phones.”

Bing’s ad revenues were below expectations, however,  continuing to work with Yahoo on improving ad revenues is the company’s “number-one priority.” Koefoed said Microsoft is “laser-focused” on getting the revenue per search up in the months to come. As far as Yahoo is concerned, “This is a long term alliance.”

The company’s acquisition of Skype was a hot topic during the Q&A portion of the call. Klein said Microsoft is expecting “low single digits” of percent growth for revenue for the second quarter and “growth in the teens for the full fiscal year.” However, revenue from Skype was not part of today’s posted earnings, and the company is still very much in the beginning stages of figuring out how Skype will figure into its larger business, including its mobile and advertising offerings.