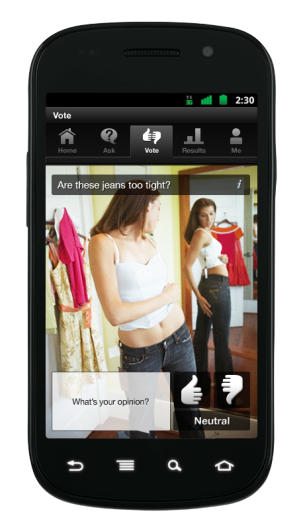 Everyone’s got an opinion — something that the mobile question and answer company Opinionaided has tapped into with its popular iPhone app. Today, the company is releasing its long-awaited Android app, which will help to spur on Opinionaided’s skyrocketing growth and increasing use engagement.

As of September, active users are now spending 3 hours and 25 minutes on the app, compared to around two and a half hours in August. Opinionaided users gave over 10 million responses to over 250,000 questions last weekend alone. Clearly, users are finding something addictive about the service, which allows you to take a picture on your phone, ask a question, and instantly receive responses.

“What is most significant to us is that we are creating a social utility based on helping others, with little judgment or bias,” CEO Dan Kurani said in a statement today. “By adding the Android app, we are able to cultivate a larger and more inclusive community of mobile users.”

Kurani tells me it took the company some time to put together the free Android app, which is now available on the Android Market. The Android app still doesn’t have some of the sharing features that the iOS app has, but Kurani says they’re coming soon.

In my brief testing of the Opinionaided service, I was struck by just how quickly responses to my questions came. That near-instant engagement even surprised Kurani when the app was first launched. He says that users are now seeing between 50 and 100 responses per question, with an average of 70 responses. Kurani attributes the impressive users engagement to the company’s focus on on opinion Q&A, instead of fact-based Q&A like Yahoo Answers.