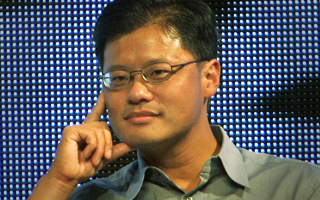 Yahoo co-founder and former CEO Jerry Yang says that while Yahoo’s board is famously exploring all its options, it’s not necessarily up for sale.

“The intent going in is not to put ourselves for sale. The intent is to look at all the options,” Yang said on stage at the AsiaD conference in Hong Kong.

This coy wording may come as a disappointment to the slew of would-be buyers already in line to snap up the struggling web company.

Aol’s Tim Armstrong has been pitching a Yahoo acquisition or merger to the company’s top investors. Microsoft has also been flirting with the idea of buying Yahoo. And earlier this month, Alibaba CEO Jack Ma overtly stated he was “very, very interested” in buying the company lock, stock and barrel.

Also on the list of Yahoo’s potential buyers is Yang himself. Just days ago, we learned that he was interested in raising some funding, buying Yahoo back and taking it private.

Right now, however, Yang and the rest of Yahoo’s board are concerned about maintaining the company’s hold in Asia (Yahoo Japan is a SoftBank subsidiary, and the company also has a 40 percent economic interest with 35 percent voting rights in Alibaba), reaching “better and higher growth” globally, and finding a new CEO.

But in acknowledging all of Yahoo’s moving parts and its many “options,” Yang didn’t specifically nix a sale, either.

Noting that he wants the company to reach its full potential, he said, “There are many ways of creating that environment. So far, we have not ruled out any possibilities.”