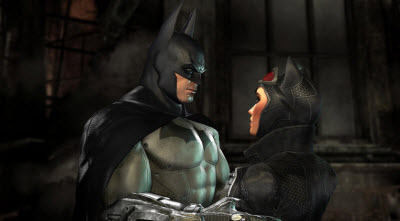 When not hovering safely above the ongoing turf war between henchmen loyal to various villains, Batman is doing what he does best: hitting bad guys so hard they crap their buddy’s pants. And although it’s fair to say that the Arkham combat engine is similar to that of Assassin’s Creed, I found it eerily reminiscent of Mortal Kombat. Every time I smashed a thug’s face I expected a slow-motion X-ray view of their eyeball popping out. Batman makes a big deal about never killing anyone no matter what, but you can’t tell me he hasn’t inadvertently punctured someone’s lung or snapped a neck with all of his rough-housing.

Fans of the original Arkham will be glad to hear that not much has been changed, only tweaked and improved. One button is used for melee attacks and combos, another for counters, and a third for stuns. Stunning an opponent now allows for a special beatdown assault which rapidly increases the combo meter, unlocking special moves that instantly KO a single enemy, permanently break an enemy’s weapon, or even knock all nearby enemies down. Counters have also been expanded, allowing up to three enemies to be countered at once.

Since Batman will be facing off against considerably larger groups this time around, he’s also been granted a larger arsenal with which to dispense the hurt. Learning to use the various quick fire gadgets at his disposal are key to mastering combat, though I expect the average gamer will never really scratch the surface of what’s possible here. I’ve already seen people complaining about the “dumbed down, two-button gameplay,” which is an outright fallacy.

As you progress through the game, new enemy types will be introduced that require new approaches: armored thugs must be stunned before being attacked, while cattle prod-equipped guards require Batman to flip around behind them. Finally, certain enemies are marked as informants for The Riddler. In order to interrogate them for information, Batman must save them for last during a brawl. This introduces an all-new edge to the combat, as not knocking a specific someone out can be even more dangerous than usual. Once everything the game has to offer is working in tandem, the extremely accessible combat system reveals its true depth. 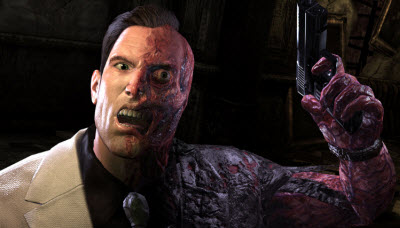 Boss battles have also been revamped, and in general Batman will be able to regularly interact with villains in a more dynamic way. In fact, as seemingly a direct counter to complaints regarding the first game’s by-the-books boss battles, one villain blatantly adapts to Batman’s tactics requiring players to make use of every takedown move at their disposal. Other bosses are a little less open-ended, but none ever feel nearly as rote as the Killer Croc encounter in Batman: Arkham Asylum.

Unfortunately, stealth remains roughly the same as before. That’s not to say it isn’t fun, but for a character notorious for lurking in the shadows, there is an extreme lack of shadows in Arkham City. If this game were a scary movie told from the viewpoint of a thug, someone in the theater would be screaming “Look up! He’s right there!!” every five minutes. What I mean is, and you already know this if you’ve played the previous game, as long as Batman is in a designated safe zone, the AI won’t notice him. That six-foot-tall caped crusader hanging from the gargoyle in plain sight in a well-lit room full of enemies? Completely invisible. The bad guys even start using infrared goggles to check hiding spots, which is as absurd as the season finale of TV show Smallville where no one notices a giant flaming planet hovering in Earth’s atmosphere until it’s picked up on a radar. “Look up! It’s right there!!” The poor presentation of the stealth gameplay is not just detrimental to the game itself, it also has the added effect of making Batman considerably less cool than he really should be. If you’ve ever seen Batman rise up from the shadows behind a panicked thug in a comic, movie, or cartoon, and thought, “Man, that would make for an awesome video game,” you’ll unfortunately have to wait for the next sequel, as there’s none of that here. 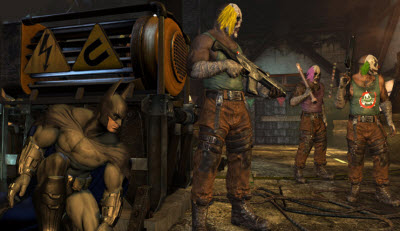 Rocksteady should be commended, as Batman is no simple character to take on. Many have tried, and they either focus too much on his stealth, or his combat, but no one ever really nails the many complexities and talents of Bruce Wayne. To that regard, Batman: Arkham City plays up all of those aspects, with an increased emphasis on detective work. Fear not, as the game hasn’t been transformed into one giant CSI simulator, yet there are many instances where a crime scene is established and Batman must use the Detective Mode view built in to his suit to search for and examine clues. With the help of Alfred, Oracle, and his own intellect, Batman will decipher these leads, so the player sort of takes a backseat to most of the heavy lifting, but that’s where the Riddler comes in.

Like in Arkham Asylum, the Riddler is essentially responsible for Arkham City’s collectibles. Hundreds of Riddler trophies are hidden throughout the game, and again, Rocksteady should be applauded for really going above and beyond what any other game has done to date. Instead of simply finding and picking up a Riddler trophy, players must figure out a simple puzzle, usually involving one or more of Batman’s many gadgets. Some are easy, some are more challenging, but every single one is different. If you look at a rival series such as Assassin’s Creed, which also has tons of collectibles, from feathers to glyphs to flags, they are all accessed the same way. You simply find them and collect them. The same is true of far inferior games as well, so it really is a testament to the quality of Rocksteady’s Arkham titles that each collectible, out of hundreds, is its own puzzle or mini-game. Beyond those, the Riddler also has riddles that must be solved in each location. To do this, you must find the solution in the environment and then scan it with Detective Mode, essentially giving Batman: Arkham Asylum a fun little camera function.