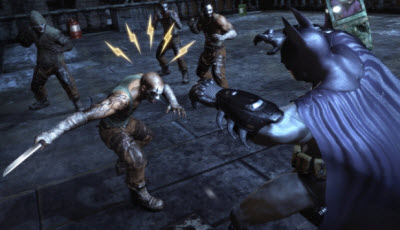 Batman: Arkham City sports roughly 10 hours of main story playtime, but chances are you’ll get sidetracked many times over between the opening and closing credits. There are a handful of intriguing, multi-part side missions to take on, all rooted in the Batman lore. One of the more interesting side missions involves Calendar Man, who you must visit on a specific day once a month (real-time). Each time he will tell you a story about a murder he committed on that day, until you’ve heard all 12 and earned your pitiful 10 achievement points.

Another fine example illustrating the layered side missions in Batman: Arkham City is that of the Payphone Killer. He will call a random payphone which Batman can find and answer, then forces Batman to race across the city to locate another ringing payphone in a set amount of time. If Batman fails, someone dies. Once the second phone has been answered, the murderer retells a story about how he came to be the person he is today, all while Batman attempts to trace the call. This happens over several calls throughout the game, eventually leading to a climax at the killer’s hideout. After playing this game, it’s going to be hard to go back to every other title that still adheres to the “old” way of doing the same exact thing over and over again, ad nauseam. Batman: Arkham City is a very forward-thinking game, and other developers should really, really sit up and take notes. Please.

Long after the side missions are complete, players will still be hunting down Riddler trophies and solving riddles, each one bringing them closer to finding the location of one of Riddler’s hostages. In a semi-Jigsaw-type deal, Edward Nigma has locked away a handful of victims in various devices and chambers designed specifically for the World’s Greatest Detective to solve. Or not, as Riddler has no intentions of playing fairly. These encounters greatly raise the stakes, and give additional motive for collecting all of the Riddler trophies.

The arcade-like Combat and Predator modes make their return in the Riddler’s Revenge. Accessed from the main menu, these various challenges get straight to business, no story needed, and will put players’ skills to the ultimate test. It’s not just about surviving anymore, but rather about performance. Can you string an entire battle with 15 enemies into a single combo? Can you take down each thug in a different way without alerting anyone? The new Campaign challenges are three combat/predator missions back-to-back. Modifiers are also introduced in the Campaign challenges, and although you can assign each one at will, all of them must be used by the end of the challenge. Modifiers include a forced time limit, a protective aura that moves from enemy to enemy over time making them invulnerable, as well as positive modifiers such as super powered attacks that punch through shields or armor and free medals in case you didn’t meet all the requirements of a certain challenge. It’s a very dynamic, challenging and rewarding mode that will give players tons of mileage, especially considering The Riddler’s Revenge modes can be played by Batman, as well as any of the DLC characters such as Catwoman, Robin, Nightwing, and whoever else should come along further down the road. Is it too much to hope for Huntress or Talia al Ghul?

Many fans of Batman: Arkham Asylum have replayed the game at least once, usually on the hardest difficulty. With that in mind, Rocksteady added a New Game Plus feature, but took it an extra step beyond what is found in other games. Unlocked by beating the game on Normal or Hard, New Game Plus is separate from your original campaign, though the two share XP, ability and gadget unlocks, and Riddler trophies/challenges. This wisely allows you to go back and forth, mopping up any collectibles, side missions, or achievements post-game in the original playthrough, while also working towards completing New Game Plus. However, the true genius of New Game Plus is that it remixes the entire game to be more challenging. Enemies are more ferocious and heavily armored straight from the beginning, with different formations than before, and the counter icon no longer appears when an enemy is attacking. After whizzing through the game the first time, I openly welcome the increased difficulty, though I probably should have put more points into my bulletproof plating…. 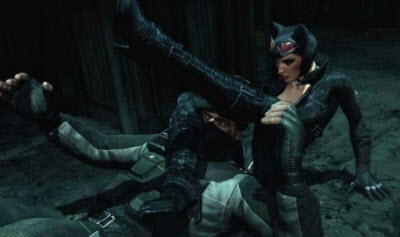 Now, I’ve been waiting this entire review to rant and rave about what I feel is easily the best part of an already amazing game. As you likely know, Catwoman is a playable character available to anyone who buys Arkham City new, or pays an extra $10 to download her as DLC. But unlike Robin/Nightwing, Catwoman is interwoven into the story. If you don’t have her installed, you will miss four playable chapters that give some optional insight into the story of Batman: Arkham City, as well as the game’s sole encounter with Poison Ivy. I’ve seen a lot of reluctance by the public to have Catwoman be a playable character, and I myself was hesitant to pre-emptively celebrate what could easily have been a half-baked attempt to hype up the marketing efforts and fight secondhand sales. Now that I’ve played as her, I have a difficult time switching back to Batman….

Catwoman is the clawed ballerina to Batman’s brutish brawler. As someone who usually chooses the more nimble characters over the sluggish tanks, she’s the perfect character for me. She’s so nimble, in fact, that she can run up behind enemies without being detected. Her animations are masterfully done, simultaneously depicting the part-time villain, sometime-heroine’s seductively sensuality, cat-like grace, and femme fatale brutality. For a game that curiously lacks epic set pieces and high action moments, every fight Catwoman gets into constitutes a watercooler moment. Catwoman displays the game’s most visually compelling and elegant attacks, flipping about acrobatically and using her whip or caltrops to stun enemies before scratching their eyes out. She makes Batman look like a drunken bar room scrapper by comparison.

Lacking the flight abilities of Batman, Catwoman uses her whip to travel the rooftops of Arkham. If point B is too far from point A, she will whip as far as she can and then latch on to the target structure with her claws. A green icon will appear, requiring specific button timing in order to leap to the next spot. Climbing a building can take as many as eight jumps (though it usually averages between 2-4), drastically changing the way the game is played. Thinking about that from a technical standpoint, Rocksteady literally built substantial, all-new mechanics just for Catwoman, and the extra effort has paid off in spades. The Riddler has left trophies specifically for Catwoman as well, though she can also pick up Batman’s. For added entertainment, Selina can don her Animated Series outfit, and is available in the post-game freeroam.

Catwoman adds a whole new world to the Arkham universe. I never thought it possible, but this game has wiped that Halle Berry calamity from my memory banks and instilled a love for the character that I could just never muster until now. I don’t know if I’d feel the same way if this game were called Catwoman: Arkham City, but as is, she is the perfect counterpart to Batman, and goes a long way to making this game an even more well-rounded package.

Massive value for fans of The Bat

Rocksteady has managed to not only create one of the greatest pieces of Batman culture, but has also elevated Catwoman to the upper echelon’s of gaming’s most able-bodied females. Between the wealth of campaign content and Riddler’s Revenge modes, Batman: Arkham City will likely be spinning in my disc drive until The Dark Knight Rises hits theaters next year, and probably long after that given suitable DLC. It’s not a perfect game, but it’s also hard to imagine where Rocksteady can go from here. 89 out of 100.