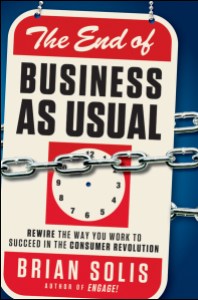 What lies ahead is a cold war between Google and Facebook, where your social graph is at stake. Facebook is taking large steps to move you away from Google and Google is fighting back with Google+. Facebook is vying to become your home page. The company believes that your social graph should be the starting point to your online experience each and every time you fire up your browser.

While Google+ hit 10 million users in 16 days, it took only an additional week to double its size to 20 million, and now stands at 40 million users, according to Google’s latest quarterly report. Google+ isn’t the last social network to hope to compete for the attention of the connected consumer, either. Regardless of network, connected consumers are increasingly leaning on their friends for empowerment, entertainment, and enlightenment. Social networks are now personal hubs that bring information, people, and businesses together.

And what of Twitter? The year 2010 will be forever commemorated as the year Twitter matured from a cool but undecided teenager into a more confident and assertive young adult. While there’s still much room to mature and develop, Twitter’s new direction is crystallizing.

With a new look, Dick Costolo as the new CEO, and an oversold new advertising platform, Twitter is growing into something not yet fully identifiable, but formidable nonetheless. In fact, in 2010, Twitter attracted more than 100 million users, its largest growth rate in the history of the company. In just one year, 44 percent of its total population moved into the micro-utopia in the hopes of finding and sharing something that has been missing elsewhere online and in real life.

At a minimum, Twitter is an extension of each one of us. It feeds our senses and amplifies our voice.

We’re connecting to one another through shared experiences, creating a hybrid social network and information exchange tied by emotion and interest. While Twitter provides the technology foundation, it is we who make Twitter so unique and consequential by simply being human and sharing what we see, feel, and think—in Twitter time. It’s both a gift and a harbinger of enlightenment. As new media philosopher and good friend Stowe Boyd once said, “It’s our dancing that makes the house rock, not the planks and pipes. It is us that make Twitter alive, not the code.”

Twitter is like a moon that orbits a networked planet. It turns the tides. It defines its rotation. Twitter is your window to relevance, but Facebook is your home page for the Social Web.

We are witnessing the dawn of a more social consumer. In the United States, we have a few top traditional TV networks that compete for our attention: CBS, ABC, and NBC. In social networking, we now have three networks to compete for the online attention of not only Americans, but also the world: Facebook, Twitter, and Google+. Each in their own way serves as the foundation for our social operating system and in turn, we continue to change how information and experiences travel.

With every post, comment, and photo we share, we trigger a reaction. With our relationships serving as the construct for any social network, we are realizing that the social effect is ours to define.

Brian Solis is a principal analyst at Altimeter Group, a research-based business advisory firm. For the last 14 years, Solis has studied the effects of new media on business, marketing, publishing, and culture.