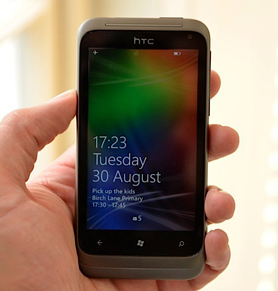 The Windows Phone 7 mobile operating system has an uphill battle ahead of it this holiday season, with fierce competition from the brand-new Apple iPhone 4S and Google Android devices such as the Galaxy Nexus and Motorola Droid Razr. Several research firms like IDC and Gartner have predicted strong growth for Windows Phone during the next few years, but I suspect it will have much stronger sales in the rest of the world than in the U.S., at least initially.

Still, if Microsoft and its manufacturing partners want to maintain and grow its U.S. user base, they have to keep new products coming down the pipeline. The HTC Radar 4G is one such product, and it features a 3.8-inch screen, 1-GHz Snapdragon processor, a 5-megapixel rear camera, front-facing camera for video chat, and 4G HSPA+ connectivity.

Those looking for a bit more power and heft with their Windows Phone running Mango might want to look out for the dual-core HTC Titan, which is headed for AT&T. Other phones out this holiday season with Mango include the Samsung Focus S and Samsung Focus Flash.

Will you purchase a Windows Phone 7 device this holiday season?