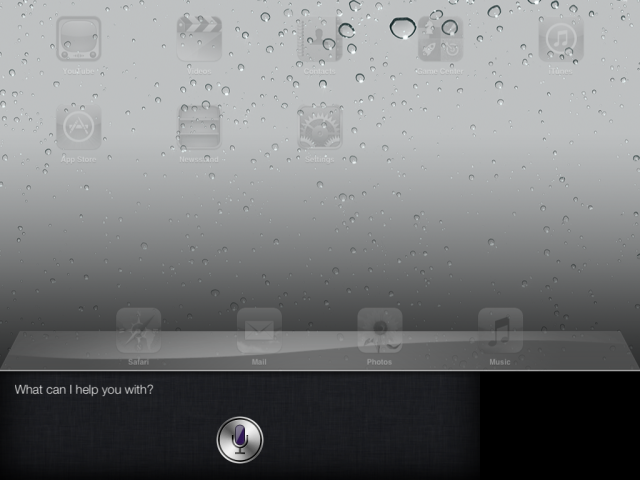 Just over a week after successfully porting Siri to the iPhone 4, developers have added the popular voice control feature to a jailbroken original iPad.

Siri is arguably the most interesting upgrade in the iPhone 4S. Siri is essentially a voice assistant that fits in your pocket. It allows users to ask it questions (like what’s the weather forecast), lets you update your calendar and email your contacts, and it even finds and recommends things for you to do around the area. However, this great feature is currently only officially available on the iPhone 4S.

As VentureBeat’s Meghan Kelly previously pointed out, Apple has been known to make new features only available for its newest products to make them the most appealing. Anything that doesn’t offcially have Apple’s blessing isn’t going to work very well — even when hackers manage to get around software limitations. Therefore, porting Siri to other devices running iOS 5 doesn’t work perfectly.

Some of the functionality for Siri depends on having your device connect with Apple’s servers. By default, these servers only communicate with devices that can be correctly identified as iPhone 4Ss. And while hackers can trick these servers into thinking a jailbroken iPad is a iPhone 4S, the device still may not gain the full functionality of Siri. As Jailbreak news blog  JailbreakStory points out, Siri’s interface could be used to query Google and a few other services, nothing else.