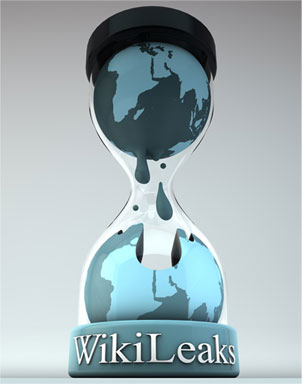 WikiLeaks has suspended publishing of leaked documents to draw awareness to its precarious financial plight.

In many ways, it strikes us as a more dramatic version of NPR’s Pledge Week: If you support the organization financially, your regularly scheduled programs just might resume.

“We are forced to temporarily suspend publishing whilst we secure our economic survival,” reads the WikiLeaks homepage today. “We cannot allow giant U.S. finance companies to decide how the whole world votes with its pocket.”

In a packet of documents [PDF] on what WikiLeaks is calling a “financial blockade,” the organization reveals it has been running on cash reserves since the end of 2010, when a number of financial and web services companies began denying service to WikiLeaks.

The denials were ostensibly based on WikiLeaks’ violation of various Terms of Service, which prohibit the use of services such as Amazon’s web hosting and Paypal’s money transfers when connected with copyright-infringing or illegal activity. However, WikiLeaks has stated that the companies chose to stop servicing WikiLeaks for political reasons.

The organization now says that over the course of the past 11 months, the “arbitrary and unlawful” blockade has prevented more than 95 percent of donations to the organization and has cost WikiLeaks “tens of millions of dollars in lost revenue.” WikiLeaks further states that organizations such as Amnesty International and Greenpeace could be in similar straits.

“Any organization that falls foul of powerful finance companies or their political allies can expect similar extrajudicial action,” reads a statement from WikiLeaks, which also notes that various UN and U.S. government officials have stated there are no legal grounds for blacklisting the organization.

As detrimental as the December 2010 “blockade” was, it also coincided with a huge spike in successful donations to WikiLeaks. Successfully completed contributions peaked that month at around 800,000 euros.

WikiLeaks is particularly zeroing in on Bank of America, which it says was responsible for an extensive and expensive smear campaign against the non-profit. In February 2011, WikiLeaks published a series of slides that it said showed a collaboration between Bank of American and tech security company HBGary to discredit WikiLeaks, hack the organization’s infrastructure to get the identities of leaks, and destroy the reputation of its founder, Julian Assange. Bank of America says it hasn’t seen the slides yet and has no interest in seeing them.

WikiLeaks is now attempting to raise around $3.7 million to cover the following costs:

WikiLeaks’ publishing activities will presumably resume once an unknown but substantial figure has been secured.