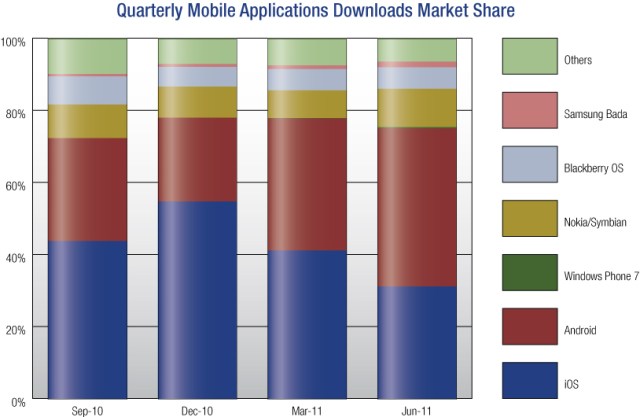 Out of all mobile app downloads in the third quarter of 2011, 44 percent were Android apps, making Android the market share leader over iOS’ 31 percent, according to data from ABI Research.

The research firm attributed the large shipment of phones running Google’s Android operating system as the reason for the high market share. The total number of Android devices activated worldwide has now reached 190 million (or an estimated 600,000 per day), according to Google.

Also worth noting from the research firm’s data is that Android’s installed base (the number of phones running Android) is 2.4 to 1 over devices running iOS. ABI said that ratio will reach a stunning 3 to 1 by 2016.

But number of downloads doesn’t necessarily mean Android is besting Apple. According to ABI, Apple is leading in the number of downloads per person. People download two iOS apps for every one Android app. Also, Apple’s strategy toward monetizing applications is more attractive to innovative developers, as more users on iOS are willing to pay for applications.

Finally, ABI reports that the total number of mobile app downloads ever will reach 29 billion by the end of 2011. Comparatively, people only downloaded nine billion apps worldwide in 2010.