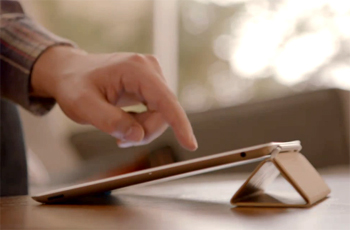 A new Pew Research Center study shows that the behavior of tablet owners is changing significantly when it comes to consuming news, for good and bad.

Several studies have already shown that tablets create a higher level of engagement than a desktop or laptop, most likely because of the physical interaction with content and media. A popular video floating around the web even highlights tablet interactivity versus traditional print media using a baby as a barometer for engagement. But in this Pew study, we see how this tablet engagement translates specifically to news consumption.

The Pew study shows that 11 percent of U.S. adults now own tablets like the Apple iPad, Samsung Galaxy Tab or Nook Color. Seventy seven percent of these tablet owners use their devices daily, and the average tablet user spends 1 hour and 35 minutes on their device every day. The most popular activity for these users is reading email, with 54 percent checking daily. Surprisingly, reading news comes in a very close second place with 53 percent of users reading headlines and in-depth features daily. The third place activity is checking social networks like Facebook and Twitter at 39 percent.

The majority of tablet users, according to the survey, are employed full-time, affluent with family income totaling more than $75,000 per year and educated, with most users have college degrees. The Pew Research Survey collected the data in the summer and early fall of this year, questioning 1,159 tablet users over the telephone.

When it comes specifically to news consumption, the results are a mixed bag for media outlets. Yes, tablet owners love consuming news and they gobble it up on the browser and news applications. But, much like the hordes of regular Internet users, tablet owners don’t want to pay for the news they consume on their iPads and Android tablets. A disappointing 14 percent of tablet owners surveyed have paid for news specifically for the tablet. Among those who haven’t already put money down, 21 percent said they would consider paying $5 a month for news while 10% said they would pay $10 a month for news on the tablet.

A breakdown of specifics on tablet and news habits can be viewed below:

Are you willing to pay for news on your tablet?