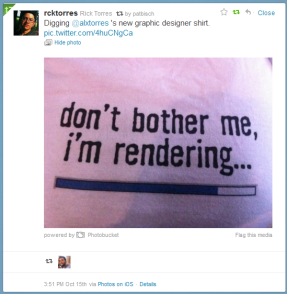 Patrick Bisch, founder of Pinglio.com, was on his Twitter earlier today when he noticed something different. His timeline, or stream of tweets, suddenly had new features including a button to expand tweets.

Thus far, Twitter’s timeline has been fairly cut and dry. There are the tweets themselves, a time stamp and the name of the source the tweet came from. A slider opens on the right side of the Twitter page to show media and a section of replies or photos and videos. Nothing much more fancy is needed for a 140 character conversation. But it seems Twitter may be streamlining the look of its stream.

Bisch, who wrote about the changes on Pinglio, found that his retweet, reply and favorite buttons had been moved to the top of his tweet, as opposed to living on the bottom as per usual. When he hovered over the buttons, the time stamp, which usually appears at the top right of the tweet, read “open.”

When clicked, the open button does just that, it isolates the tweet in the timeline and also shows any replies to the conversation associated with that tweet. Similarly, you can open multimedia tweets to view photos — photo uploader agnostic — and potentially videos. If a tweet in this new timeline has been retweeted, the open function will show a horizontal list of all those who retweeted.

To view a specific Twitter handle, the profile appears floating over the rest of the Twitter stream, as opposed to on the right hand side of the webpage. It still only shows the last three tweets made by that handle.

Why these showed up in Bisch’s stream is unknown. We’ve reached out to Twitter for comment and will update upon hearing back.

Check out the video from Bisch below: