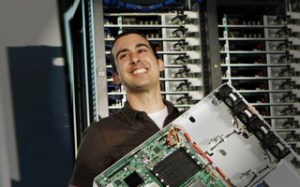 Today, Facebook announced it is opening up its fancy, redesigned data centers to help hardware hackers learn from and improve on their designs.

The Open Compute Foundation, announced today, will allow anyone to access the designs and specifications for Facebook’s homebrewed and highly efficient data center hardware and will provide structure for the project.

To join, hardware designers and hackers need to sign an agreement on the Foundation’s site, find an aspect to work on and sign an open licensing agreement to do that work. Designs will be voted into the official project based on merit.

The goals are to make data center energy usage more efficient, to make server repairs faster and fewer and to figure out better ways to serve data at massive scale, e.g., billions of users, what is known as “human scale.”

“This is not going to be a community that’s going to write wish-lists,” said Frank Frankovsky, one of the founders of the Open Compute project at a summit in New York City this morning. “We’re publishing not only specifications but also source files.”

“When we first launched this project back in April, people thought we were crazy,” said Frankovsky.

Now, however, Facebook’s groundbreaking work in data center efficiency and server redesign will be open for all to hack on and improve. As an example, Frankovsky mentioned Facebook’s newest data center in Sweden, a hydropowered facility that he said is “our greenest yet.” That design will be open sourced, its specs published and available for anyone to manipulate and possibly enhance.

Right now, you can go to the Foundation website, login with your Facebook and Github accounts, and start checking out the components that make up Facebook’s data centers, from the motherboards to the chassis — even Facebook’s completely redesigned power supplies.

“Let’s build this together,” said Frankovsky. “If we start sharing our ideas, the pace of innovation is going to increase rapidly. … Let’s start focusing on the environment and the efficiency of this.”

Asus, Intel and AMD are involved as partners and will be publishing specs and source files, which hackers will then be allowed to modify and submit back to the project. Dell is also a major partner for the project.

Facebook’s Open Compute project has inspired the interest of the hardware hacker and open-source communities, individuals and groups that Facebook said “are passionate about making strong technical contributions to defining and delivering the most efficient server, storage and data center designs.”

“I think it’s pretty clear there’s no question about whether companies should be using open-source software or not,” said Recordon to VentureBeat back in August. “That was answered over the past decade. The question now is about open hardware. Many of the things that we have today for open-source software we don’t have for hardware and standards.”

Amir Michel, who heads up Facebook’s open-source hardware efforts, also told us in an interview on Facebook’s data center redesign, “A lot of the tools aren’t there yet,” said Michael. “If someone wants to make a change to one of our circuit boards, it takes hundreds of thousands of dollars to get that package. The average hacker doesn’t have that. Most of the contributions so far come from other large companies. We’re hoping to change that in the future so a guy in his garage can design a motherboard.”