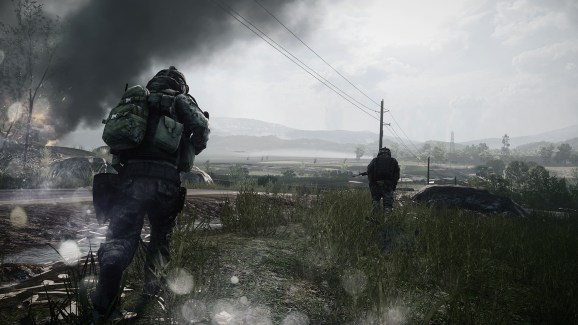 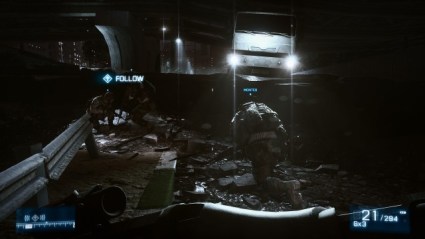 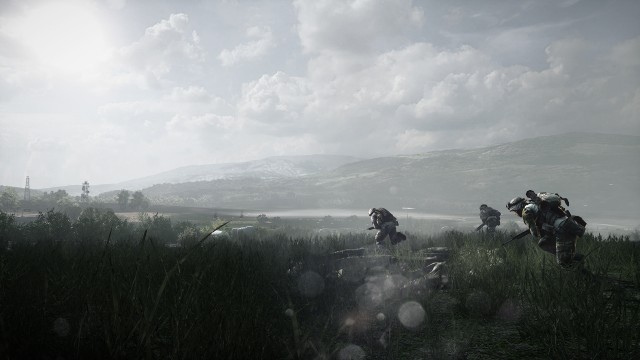 Multiplayer is tried and true, but nothing new

DICE has been in the Battlefield business for nearly a decade now, with the first installment, Battlefield 1942, releasing in 2002. Although I’ve played every single iteration since, my favorite remains to be Battlefield 2 for the PC. Up until then I had been playing Return to Castle Wolfenstein (released in 2001) non-stop, so Battlefield 2’s massive, wide-open Conquest maps and gratuitous vehicular warfare were the perfect complement to Wolfenstein’s generally tighter quarters. I remember hopping in a fighter jet at my camp, boosting over to my objective and parachuting out. It never got old, and I’ve been waiting for the next evolution of that experience ever since.

Battlefield 3 is not that game.There are an ample number of modes to play, including the signature Conquest mode, where two teams of up to 12 players each attempt to take control of capture points spread across the large maps. Other modes include Squad Rush, Squad Deathmatch, and for the first time since Battlefield 1942, Team Deathmatch. Although they all offer something slightly different, I prefer Rush, where teams are split into Attackers and Defenders. The Attacking team must race to destroy the enemy’s MCOM stations before time runs out. Each time two are destroyed, the Defenders are pushed back to a new area and must attempt to stave off the Attackers. It keeps things fast and furious, and the constant change of scenery prevents the surroundings from getting stale, though the random invisible barriers can be frustrating.

There are four classes to choose from, each with their own unique purpose on the battlefield. The Engineer is proficient at repairing and destroying vehicles, while the Assault can drop medic packs or revive fallen comrades. There are also tons of weapons, accessories, and specializations (ie. perks) to unlock for each kit, though I’m not particularly fond of Battlefield 3’s setup. Anyone coming into the game a week after launch is going to be sorely outgunned, regardless of skill. Just having a reflex scope on a starter weapon makes all the difference in a gun battle. This system is a growing, industry-wide practice, but so is paying for on-disc “DLC.” It doesn’t make it okay. 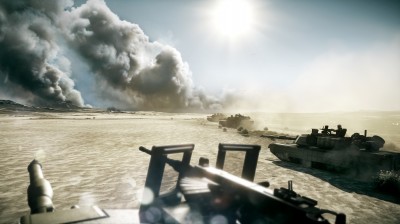 Battlefield 3’s multiplayer is mostly the same as it has always been, but there are a number of notable, suboptimal mechanics bringing the entire affair down. Whether it’s the annoying inability to exit multiplayer before or after a match (you have to load the next match and then quit in-game) or the plethora of glitches, many of which are leftover from the beta and were seemingly not addressed in the day one 167 megabyte patch that you have to download. As I mentioned before, the destruction engine is drastically underutilized, and there’s no denying that the home console versions being restricted to 24 players (as opposed to the PC’s 64) has vastly diminished the intended Battlefield experience.

For a franchise as seasoned as Battlefield, there are a lot of components that just don’t seem to be as polished as they should be. In both single-player and multiplayer, other characters are not always clearly designated as friend or foe until it’s too late. I spent five minutes chasing some poor kid around unloading clip after clip into him because the game never registered his name on my screen or his icon on the map. He turned out to be on my team. This kind of fighting assumes you can even see who’s around you, as there’s always some thick cloud of smoke or dust reducing visibility. Worse yet are the “smudges” that appear on your screen for a variety of reasons. It’s not the same as the suppression effect, which actually makes sense, when your vision is blurred because you’re being shot at; this is just DICE trying to be artsy and realistic and failing in a very obnoxious way.

Knifing an enemy from behind is occasionally shoddy, especially if they’re crouching or prone, and players equipped with mortars have already found ways to infinitely spam enemy objectives with an impenetrable wall of explosions. Perhaps the most amateurish design flaw, however, is the archaic respawn system. When placed in a squad, you can respawn on any living member at their precise location. In many cases, this will either be right in the middle of a firefight where you’ll die before your HUD even appears, or you’ll often see one enemy, then turn around and three of his friends have magically appeared right behind him. It’s extremely unbalanced, and something DICE should really have figured out at this point. The squad system itself is broken, as you will often be separated from your friends when starting a new round.

Like literally every game since Battlefield 1942, Battlefield 3 suffers from severe server issues. This does not just mean lag or random disconnects, which do happen, but rather the EA Online servers have been going up and down for hours at-a-time, effectively cutting day-one purchasers off from the only redeeming portion of the game. Last year, EA offered the poorly reviewed Medal of Honor up against Activision Blizzard’s Call of Duty Black Ops, which outsold the EA title several times over. It’s even more absurd after EA CEO John Riccitiello’s chest-thumping, insisting that Battlefield 3 was superior to Modern Warfare 3 in every way, and the fact that multiplayer requires an EA Online Pass just to access.

All things considered, the many issues Battlefield 3 on the Xbox 360 is suffering from are inexcusable, and when the game is working, what’s there is not particularly exceptional. I’m somewhat confident that over the next few months the servers will be stabilized, gameplay balances will be made, DLC will be released, and bugs will be fixed, but I’m not a fortune teller, and there’s a reason this review isn’t called “Battlefield 3: 28 days later.” For potential customers looking for the best version of Battlefield 3, you may want to seek out the PC version instead.