“We didn’t intend for it to get discovered,” said a company spokesperson in an interview with VentureBeat, “Tapjoy realized in order to get really big, we needed direct relationships with consumers.”

Some argue this is a way for Tapjoy to circumvent Apple’s new ad policies. Prior to the shift, Tapjoy was paid by app developers to promote apps by offering virtual currency for downloads. It worked like this: You’re playing a mobile game, you see one of Tapjoy’s ads for another game, you download it, and you get virtual currency in the original game you were playing. But Apple put the kibosh on this when Tapjoy’s supported games climbed the App Store most popular charts, regardless of whether the increased downloads were from active players, and started grabbing even more downloads as a result.

But Tapjoy disagrees. “It is not [a way to circumvent Apple],” said Tapjoy’s spokesperson. “In fact, the wheels for this were put in motion long before Apple ever changed their policies.” 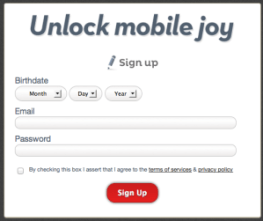 Tapjoy’s new web app, which can be found here, will take the form of a marketplace aimed at letting consumers directly interact with Tapjoy. Those who opt-in can connect their accounts to the App Store and start gaining virtual currency in games they already play.

For now, it’s too early to tell whether the degree of separation from the App Store will actually alienate some customers. Tapjoy, however, assures us this new venture is not in violation of Apple’s policies.

After the Tuesday launch, the company’s website will no longer be its business-to-business format, but a customer portal (shown right) for those wanting access to the web app. We’ll have more information after the launch.