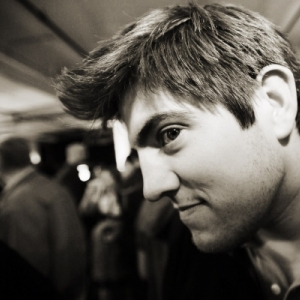 Ryan Sarver had just come back to work after his wedding.

Notice I said “wedding” and not “honeymoon.” Sarver has for some time been Twitter’s first line of defense between the company and a occasionally disgruntled army of third-party developers. The relationship between those two entities has been testy at best and an out-and-out war at worst for the better part of two years. Unfortunately, mid-2011 was no time for a honeymoon.

I met with Sarver in Twitter’s San Francisco headquarters, where bikes stood in racks against the walls and neon plastic deer and framed cross stitch decorated the foyer. It’s a hipster paradise, and the clean-cut, blazer-wearing Sarver seemed at once infinitely at home and slightly out of place in it.

But where Sarver is unquestionably beleaguered is in the relatively public forum of Twitter’s ecosystem developers: the men and women who develop apps that use Twitter’s APIs. They try to build businesses that complement Twitter, and when anything goes wrong with that setup (for example, Twitter makes a minor change to an API), Sarver is the de facto shock absorber. And that explains why he skipped his honeymoon to deal with his unruly constituency.

For such a young man, he handles the role of “the guy developers love to hate” with a large measure of grace and resilience.

“The ecosystem is over 750,000 developers,” he told me. “It’s a massive thing. Any community of that size, you’re never going to keep everyone happy at all times. … Some people might be mad at me, but I try to hear what they’re trying to say and fold that back into what we’re trying to do.

“The most critical people are usually the most valuable ones. They tell you where the points of friction are and how you can improve.”

Unlike Sarver, Twitter did get a honeymoon. There were a few years when it was the much-beloved social platform of tech insiders and hipsters everywhere. Developers flocked to it, drawn by its openness, flexibility and simplicity, building a wealth of Twitter apps and integrating it into their own web services.

Now the honeymoon is over. For Twitter to survive challenges from rivals like Facebook and Google+, much depends on whether it can continue to hold onto the love of its developer community.

“The most critical people”

In 2007, the infant microblogging service had yet to establish any real foothold outside San Francisco techies, yet it was trumpeting the wild success of its APIs. Co-founder Biz Stone said at the time, “The API has been arguably the most important, or maybe even inarguably, the most important thing we’ve done with Twitter. It has allowed us, first of all, to keep the service very simple and create a simple API so that developers can build on top of our infrastructure and come up with ideas that are way better than our ideas.”

Yet for many developers, it seemed that as soon as an outside party came up with an innovative idea, Twitter jumped onto the same idea too, stomping on the little guys. A long list of Twitter’s features, including mentions and lists, first appeared as features of third-party Twitter clients, only to be incorporated into the main service.

Of course, since such features are often dictated by user behavior and requests, just how much Twitter was scamming off the ideas of others and how much it was simply responding to user needs are unknown.

What we do know is that the company began to seem opaque to the developers who used its API. By the spring of 2010, when it hosted its first developer conference, developer angst had reached a fever pitch.

As the conference opened, the world learned that Twitter had acquired Tweetie and crowned it the company’s official iPhone app. Other makers of Twitter iPhone apps felt blindsided and betrayed. Businesses went down not with a whimper but a bang. Development shops started wondering aloud what areas of the map were safe territory and what Twitter might decide to annex next for itself. No one seemed to be getting or giving any clear answers.

Twitter had built an ecosystem before it decided on a business model, and while it tried out different avenues and experimented with new features, it wasn’t disclosing all of its roadmap to all of its presumed partners. While some folks benefited from a close relationship with the company and its founders, others suffered from a full-on communication breakdown.

It was a situation that was bound to create bad feelings.

“The change in attitude Twitter had since Chirp conference … is just the feeling that they no longer care about developers or their ecosystem,” said third-party developer Arik Fraimovich in a recent interview. “They seem to look at it from the narrow perspective of ‘what’s in it for Twitter?,’ failing to understand that in an ecosystem, all parts need to contribute and communicate. They also fail to understand that the next creative use of Twitter won’t be developed by their developers, but by some API developer — just as it was since their inception.”

A big part of the problem was what plagues many relationships: Lack of clear communication.

Twitter only gradually worked to clear things up. A year after the Tweetie acquisition, after everyone had adjusted to Twitter’s official, in-house suite of mobile apps, the company made an attempt to communicate part of its roadmap, the upcoming acquisition of TweetDeck and a renewed focus on consumer features.

In a controversial memo to a Google Groups list in March, Sarver laid down the law: Don’t make a Twitter client using Twitter’s API. Don’t duplicate Twitter’s features. Don’t rename them. Don’t channel users away from Twitter’s ads and experience.

It was clear, but it was also surprisingly heavy-handed for a company that until then had been known for its open and easy-going approach.

On one hand, Twitter as a business had every right to control how its APIs were being used. On the other hand, it had willingly and knowingly cultivated a thriving sub-economy of Twitter apps and was now telling many of them to kiss off. It’s a communique Sarver regrets, and it started quite the war of words.

Laura Fitton, the perky, audacious founder of Twitter-related startup Oneforty (and an unofficial team mom for the Twitter app community), told me back in March, “Twitter is full of genuinely earnestly awesome people who want to do the right thing, but it has resolutely failed to create the conditions for real business success on their platform.”

I also spoke to Loic LeMeur, the tall, eccentric French entrepreneur behind the rapidly pivoting Seesmic, who told me, “There are two types of Twitter apps, the ones Twitter likes and the ones that are competitive and don’t have good communication with them.”

Of Sarver’s missive, which put Seesmic in the direct line of fire, LeMeur said, “I wasn’t expecting such dramatic changes, but instead of complaining, I have to adapt to it. … Competing with your number one partner is a little dangerous.”

Jesse Stay is another entrepreneur/engineer who has built a business around a collection of social APIs, including Twitter’s. Stay is the picture of a mild-mannered Mormon, a truly kind man who would think long and hard before uttering a negative word about anyone. Still, during yet another minor but uncommunicated technical change at Twitter, he told me, “This move by Twitter is no surprise, as I’ve experienced over and over through the last three years. It’s why we’ve moved to a $29-per-month plan for all the services we offer. … That’s the only way to afford the risk of Twitter.”

Perhaps no one understands the risk of Twitter better than Noah Everett, a man whose name came up more than once in my talk with Sarver. Everett built TwitPic, a highly popular and successful app for uploading photos and sharing them through Twitter. Out of the blue earlier this year, Twitter announced it would be implementing media-sharing capabilities into its web and mobile apps, first for photos, then for videos, cutting a number of photo-sharing apps — including TwitPic — off at the roots.

“TwitPic will continue to still live on,” Everett told me when the feature rolled out to users, espousing the kind of grim optimism I’ve heard from many entrepreneurs facing hopeless odds. “We’ve got a huge base of loyal users and we still want to continue to provide them with the best service possible … regardless of this feature announcement from Twitter.”

But there was a bitter twist. Everett had the previous year started working on a stealth project called Heello, a project attempting to “make email suck less,” as he put it to me. But out of spite or pique or frustration, he decided to turn Heello into a Twitter clone.

“If Twitter can compete with its developers without fair notice, then why can’t we?” he quipped. “Twitter rolling out their photo option to everyone [the day before the Heello site launched] was a complete coincidence, but I’m glad the timing happened that way.”

These voices and many others ring in my ears – and likely, to some extent, in Sarver’s, too – as we face one another over a small table in a small conference room at Twitter.

I ask him if he thinks the company made any mistakes.

“You can always do things better,” he told me. “If you go back to the guidance we gave last March, we could have executed that message much better. The tone and format could have been improved. But the intent is still important: The most important thing for us as a platform is to give people a clear idea of where we’re going.”

And that clarity of communication is all most of these critical voices were asking for.