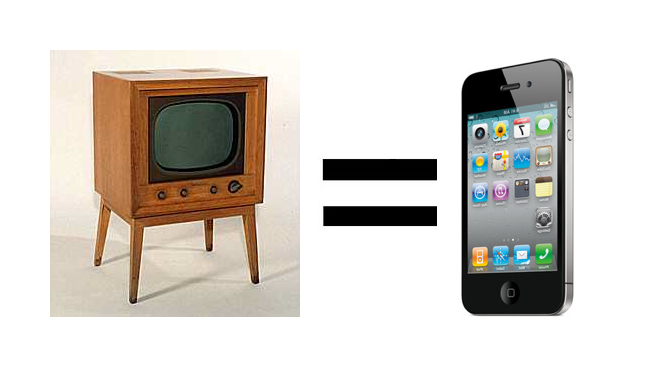 The economics of the consumer electronics industry dictate that on a long enough timescale, all products will become low-margin commodities. The companies that make products household names are destined to fade from the public’s memory. Will Apple suffer the same fate as others before it, such as RCA, who revolutionized television sets in a similar fashion but were relegated to the dustbin of history decades later?

It’s products will most certainly be commoditized, but thanks to its ecosystem of software and services (the Stores and iCloud), it will largely avoid the fate of RCA (and may just re-revolutionize the television itself).

We owe Apple for cracking the smartphone nut, re-imagining what a mobile device should be, and aggressively marketing that vision to the world. Smartphones are now mass-market household items, and although about 65% of all Americans do not own one, that number is sure to change in the coming decade. (Apple did the same for tablet computers, but let’s stay focused on one market for now.) 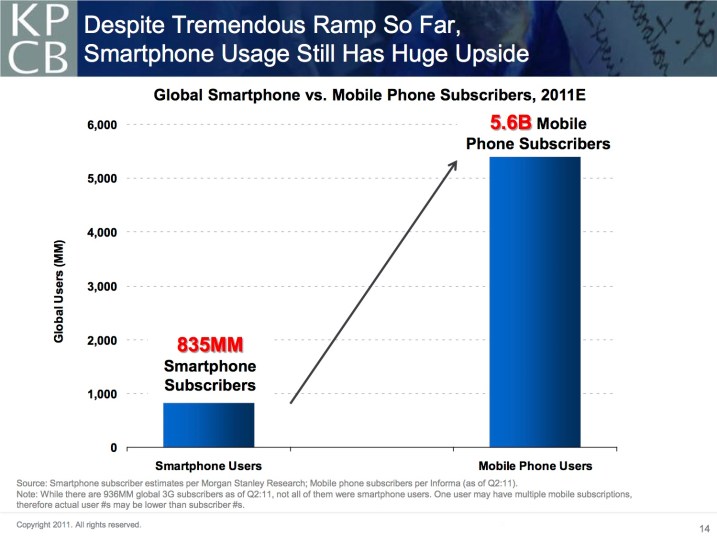 Years from now we will look back at the early 21st century and mark it as a true turning point in the story of our species. When smartphones and mobile broadband saturate most of humanity in the coming decade, most of us will be operating in the same river of instantaneous information, the effects of which we’ve yet to fully experience. See the slide below for an early example of these effects. [1] 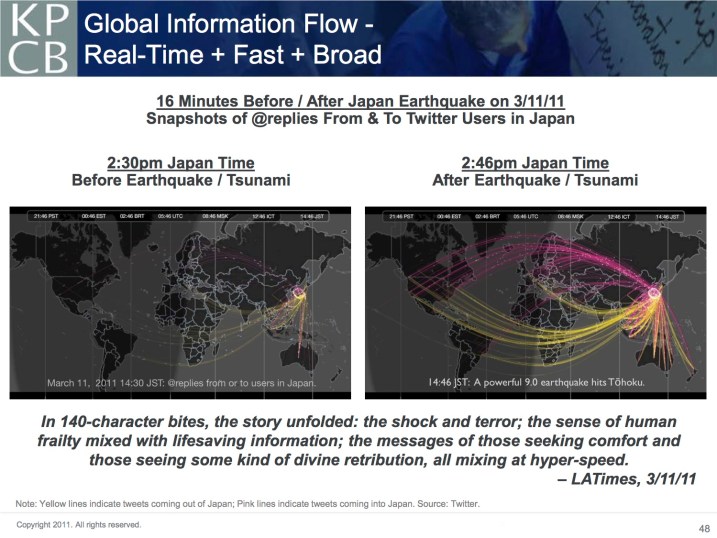 But how long will society be specifically thanking Apple for this transformation?

RCA had done what Apple did for the smartphone: making the electronic television set a household item. Philo Farnsworth may have actually invented the first all-electronic TV, just as Palm and Microsoft had made early attempts at smartphones before, but it was the radical approach of future companies that made both devices truly mass-market. Despite RCA’s initial success, over sixty years later few can recall who deserves credit for that explosive adoption.

I posit that Apple’s reputation as the smartphone revolutionary (and global information empowerment writ-large) will not fade from society’s collective memory in the same fashion.

The fate of consumer electronics devices is commoditization: a decrease in prices such that gadgets descend the ladder of affordability, from expensive luxury good to cheap commodity.

Commoditization occurs because of the underlying technology of these devices. To profitably manufacture and globally distribute a gadget like a smartphone, companies must make an extremely large initial capital investment.

The chips that run our gadgets are scientific marvels, and the factories that produce them (semiconductor fabrication plants) cannot be built for tens of millions: they cost billions. There’s just too much precision machinery, cleanroom necessities, and other operational considerations that make it an all-or-nothing investment.

In addition, chassis manufacturing requires costly CNC machines (tools that take 3D design schematics to create objects by sculpting metals with laser-precision) and the skilled labor to operate them. There’s also years of research and development that are factored into this equation as well.

These costly factors of production are offset by economies of scale, which dictate that at large enough scales, companies can mass-produce consumer electronics at a profit (ironically also making them quite affordable). At the same time, gains in manufacturing efficiency and automation coupled with improvements in semiconductor design (Moore’s Law) bring down the price by several degrees of magnitude each year. 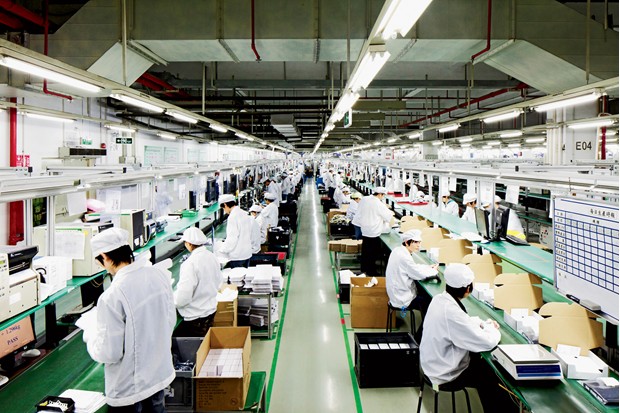 Therefore, on a long enough time scale, selling consumer electronics is a low-margin game. The bottom line is that a company will eventually run into a corner selling hardware in the consumer electronics business, unable to distinguish themselves from other brands and losing their “upper-tier” image.

RCA’s fate was no different. The same economics applies to the production of televisions, and even more so to the large flat-panel displays peddled at every BestBuy in the nation. The size of the machines that produce the large sheets of glass from which TVs are cut increase each year, making the production of larger TVs cheaper. This occurs year after year, with the same gains in technology and manufacturing that other gadgets like phones experience as well. Throughout the 1960s and 70s, television production became globalized and cheapened, in turn devaluing RCA’s product.

There is no doubt that Apple is on the same course. But unlike RCA, Apple has a plan in place to circumvent the problem (thereby keeping its image high in the public consciousness as long as possible). The writing is on the wall. Within five to ten years, producing the hardware for iPhones and iPads will be dirt cheap, and competition will keep driving prices down, eroding margins for every player in the industry.

The solution is in the Stores: the App Store, iTunes Store, iBooks Store, and all other digital media stores. With the iCloud mobile storage and syncing solution as the final glue that binds all stores across all devices, once users bring their digital lives into Apple’s ecosystem, it’s extremely difficult for them to get out.

Technology analyst Horace Dediu has crunched the numbers on precisely this type of “lock-in” effect, estimating average revenue per year per iOS user of about $150. He’s careful to note that they are recurring figures, meaning customers are expected to spend this amount indefinitely.

Why will Apple’s name as bastion of the information age last into the ages? Because their ecosystem of software and services will keep everyone entrenched in their system, making it too costly and inconvenient to switch over to other providers. Each new purchase opportunity will yield to Apple, reinforcing their presence in consumers’ minds. These recurrent purchases are not only good to the public image but also to the bottom-line. Dediu’s valuation of the company based on the recurring revenues of its install-base is a whopping $620 billion by 2014 (see chart below).

The long-term value of Apple, not just its image, rests on keeping customers entrenched, not selling hardware (though that will continue to be lucrative for some time as well).

To compete against this strategy, companies will need to fight over the consumer experience. Apple has understood this for a while (that’s why they don’t advertise detailed specs like RAM for iPhones and iPads). The entire battlefield has changed. Even the late Apple CEO Steve Jobs is quoted in his latest biography as saying that competitors like Microsoft and Android “just don’t get it” (referring to the overall consumer experience).

Apple has built a vast playpen, locking in its customers with walls as high as the sky. As this site has covered before, Apple is likely to extend this playpen to televisions soon. Consumers will be delighted to experience the same software and media on their iPhones and iPads in their living room. But competitors are not standing by idly: just yesterday Google signaled their intention to compete in the re-imagined TV space using the same weapons of software and services: Google TV will now directly support Android apps. This will ultimately benefit consumers greatly. Apple will trump the introduction of apps to TVs with a new user interface built on their Siri voice-recognition technology introduce in the iPhone 4S. Thus, Apple is well-placed to re-revolutionize the TV market and be recognized for it through the ages.

It’s a pity RCA never had any apps to sell!

[1] Slides are from Kleiner-Perkins-Caufield-Byers partner Mary Meeker’s presentation on Internet Trends given at the Web 2.0 Summit in San Francisco on October 18. It can be found here.