Squall Leonhart is the original brooding RPG protagonist — the guy everyone refers back to in their mind when they think of the supposed excesses of Japanese RPGs. He's also one of (in)famous producer Tetsuya Nomura's earlier designs, which is evident in his taste for silver jewelry, zippers, and fur-lined collars (which was apparently included as a "challenge" for the FMV crew). Perhaps not surprisingly, he's caught a lot of flack for being what Westerners perceive to be a sulky, pretty boy jerk.

Reasonably speaking, it's not hard to see why he might be off-putting. Squall is a guy who doesn't smile until the very end of the game, preferring instead a look of sullen stoicism. His responses tend to be extremely brusque, and he's socially awkward. Nevertheless, he manages to attract the attention of at least two extremely attractive women while making quite a few friends. Most of the time, a character like that would be identified as a "Mary Sue."

But on the other hand, Squall has at least one thing going for him — he's interesting. No, not necessarily to the audience (since we know what he's thinking at all times), but to other characters in the game. He broods a lot, but he's also fairly good looking, and he's apparently at the top of his class. When someone that talented and attractive is also withdrawn and moody, they inevitably draw women who are looking for an interesting challenge. For Quistis (who has her own fan club) and Rinoa, figuring out Squall means serious bragging rights.

Taken in that context, it's probably no surprise that Rinoa would approach him at SeeD's graduation ball. Seeing him standing in the corner by himself, her first thought was probably, "Hey! This could be fun," after which she dragged him bodily onto the dance floor.

Normally, that would have been that, but of course circumstances conspired to bring them together again. After that, it seems reasonable that she would start to feel closer to Squall as they capture a train together, try to assassinate a sorceress, and eventually cooperate to escape prison. Since the story is almost entirely from Squall's perspective, it's easy to imagine her hanging out with Quistis while everyone's sleeping, asking questions like, "Do you think he likes me? I can't tell. I really hope he likes me. I think he likes me."

For his part, Squall doesn't seem to be particularly interested in women. Actually, he's much more concerned with his rival Seifer, and what Seifer is "up to." At the risk of delving into fan fiction fantasies, that's not exactly normal behavior for a 17 year old heterosexual male. But then, Squall isn't exactly "normal." At the age that I was thinking about going to college, he's a professional soldier who spent most of his formative years in an orphanage (that he doesn't really remember). It would seem that his aloofness and disinterest in women is a natural consequence of having been trained as a professional killer from an early age, since it's not exactly to have normal relationships in a setting like that. After all, in a group like SeeD, friends are also teammates who can die at any time. Squall seems to have taken that lesson to heart.

What's notable though is that we only really see the beginnings of his relationship with Rinoa, as opposed to obnoxious passion. There's a notable lack of purple prose here, only a few scenes set to some seriously syrupy pop music, the latter of which was actually considered groundbreaking for its time. The final scene indicates that the two have officially entered a relationship, but it seems as if they are a long way from getting married. Cheesy as it can be at times, it's also refreshingly understated. In that sense, Final Fantasy VIII is a long way from the histrionics of Twilight and other teen romance books (from what little I understand of them).

What ends up being much more unfortunate than the romance is that Squall is basically a one-note character. While he eventually learns that it's okay to open up every once in a while, there's nowhere for him to go as a character after that. Apart from knowing that he spent some time in an orphanage, and that he has a mommy complex (or maybe a big sister complex?), Squall never gets a lot of background. By comparison, we know that his father Laguna spent some time in the military, had to suffer through the death of his young wife, did hard labor in a prison and even spent some time acting. For that reason, Laguna ends up being far more likable and engaging than his son, and because of that he manages to steal the spotlight. 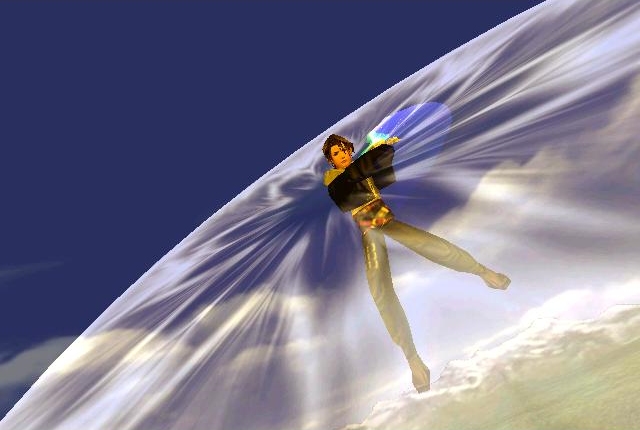 What's really unfortunate though is that Squall has regressed quite a bit over the years. While he's not quite as irritating as Cloud, who went from the deconstruction of the badass hero to a simple badass hero over the course of Advent Children, Squall's appearances in Kingdom Hearts and Dissidia Final Fantasy have lacked much of the development he enjoyed in Final Fantasy VIII. In both games, he continues to be portrayed as the aloof hero — the guy who shuns pretty much everyone. While Kingdom Hearts has a passable non-canon backstory (Squall feels guilty about having his homeworld destroyed, so he changes his name), both feel like a missed opportunity.

But while he could have stood a bit more development (what are his feelings on being a child soldier, for instance), Squall doesn't quite deserve most of the criticism that he's had to endure over the years, particularly when it comes to his relationship with Rinoa. Laguna is the better character by far, but as Final Fantasy VIII's co-star, Squall isn't too bad at all.

Like this sort of thing?  Read more on my blog at http://themolloyboy.blogspot.com/