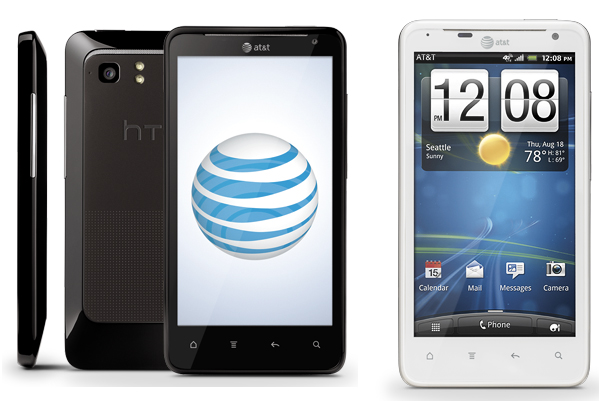 AT&T’s first two phones equipped with 4G LTE — the Samsung Galaxy S II Skyrocket and HTC Vivid — will be available Nov. 6, the company announced. The move will help AT&T better compete with Verizon when it comes to 4G.

In the race to build out 4G LTE, AT&T has been painfully slow compared to Verizon, which is why the company is just now releasing LTE-capable phones. By Nov. 6, AT&T’s 4G LTE will be officially live in nine markets — Atlanta, Athens, Baltimore, Boston, Chicago, Dallas-Fort Worth, Houston, San Antonio and Washington, D.C. AT&T said it expects LTE will be live in 15 markets by the end of the year. By contrast, Verizon’s 4G LTE network is live in more than 150 cities. Sprint runs WiMAX 4G now but said it will begin rolling out LTE 4G in 2012.

AT&T and T-Mobile have been peddling HSPA+ as 4G in their marketing campaigns, but HSPA+ networks are just boosted versions of 3G rather than completely new networks. But with the Samsung Galaxy S II Skyrocket and HTC Vivid, AT&T customers in its scarce LTE markets will be able to see what the hubbub is about.

The Samsung Galaxy S II Skyrocket is a slightly bigger and more powerful version of the already released Galaxy S II. The Galaxy S II Skyrocket runs Android 2.3.5 and features a 4.5-inch Super AMOLED Plus screen with an 800 x 480 resolution, a 1.5-GHz dual-core processor, an 8-megapixel camera that can record 1080p HD video, 16GB of internal storage, and a microSD card slot for up to 32GB cards.

The HTC Vivid has similarly powerful specs to the Galaxy S II Skyrocket. The Vivid features a 4.5-inch qHD display with 540 x 960 resolution, a 1.2-GHz dual-core processor, an 8-megapixel camera that can record 1080p HD video at 60 fps, 16GB of internal memory and a microSD card slot that can add up to 32GB of memory.

Both phones will likely sell less units than the Apple iPhone 4S, which has been a monstrous seller so far on AT&T and doesn’t offer 4G LTE. But even so, this is an important step for AT&T to take if it wants to look like a strong network competitor to Verizon.

Now we’ll have to see during 2012 if Verizon can keep its exceptional pace in expanding its 4G LTE network or if AT&T can catch up with cities and compatible LTE devices.