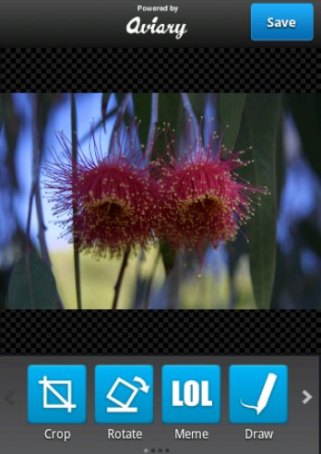 “It was a logical fit” to include Aviary’s editing tools, PicPlz CTO Jeff Argast told VentureBeat in an interview earlier today. PicPlz previously considered implementing some editing tools of its own, but Argast says it wouldn’t have been as fully featured as Aviary’s offering. “Aviary provided the full package,” he said.

The new editing features are available on the Android version of PicPlz and its iPhone app today.

Aviary’s mobile photo editor, accessible by hitting the new “Edit” button when previewing your pictures, will allow PicPlz users to crop and rotate, adjust color saturation and contrast, and add text and draw annotations. The new tools, 15 in total, will exist alongside PicPlz’s current photo effects. The addition gives PicPlz a leg up on rival photo sharing app Instagram, which doesn’t have many editing features.

Argast says it took just a few days to get the editing tools working within PicPlz, and it took under two weeks to get them fully implemented and tested. Not surprisingly, he says that he expects the partnership between the two companies to grow, which means we could see more editing tools and other Aviary-powered features in the future.